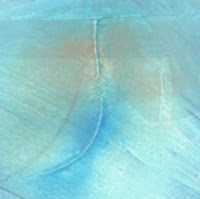 In one of the poems of this sequence the poet writes:

These lines give us an insight into he method used in this short sequence of poems about the River Dart: the poems are not personal reminiscences or observations ("it has nothing to do with me") and the speaker or persona is a conduit for language; the poems embody the river and give us a linguistic representation of it. These lines also use the white space on the page to provide an impression of movement and fluidity, and make subtle use of alliterative metre ("confluence of cloud”), both things which are evident in the rest of the sequence. A sequence about the River Dart inevitably brings comparisons with Alice Oswald's book about the river. In Oswald's case, the speaker is in control of the language, acting as a commentator, making the poetry seem at times like a voice-over for a documentary. Burnett is doing something entirely different; making poems which, instead of being secondary to a riverscape envisioned in the mind of the reader, are objects in their own right; they are, in WS Graham's phrase, “an addition to the world". The individual passages of poetry in this sequence ask to be read aloud and contain various linguistic treats; assonance, alliteration, subtle rhyme and in one case, a perfect haiku.

The poems also refer to themselves and to their own language. In a poem dedicated to the great American poet Alice Notley, we have:

the water is earth, moss boggy with life opening
letting the light
in
the word is both black & bright
blaec:
amazingly dark or pale or
colourless...
blaec with snow or blaec with earth

The explicit merging of the landscape with the words used to describe it is a feature of the sequence. "Riverring" also tackles politics - or, rather, politics is at the heart of the sequence - as in the poem "5.30pm, 13.7.16 (after Cameron before May)" in which Brexit is confronted, not in an obvious way, but in a poem with lines like this:

in & out of the rushes  /  we fade and start the water

the sensuous language and apparent escape into the natural world in fact contain anger all the more powerful because it is blended with the consolations of the river and its flora and fauna. There's a similar blending of pastoral and politics later in the sequence in a poem called "Gold", dedicated to the African-American swimmer and Olympic medallist Simone Manuel:

The sequence ends with the poem "Grendel's Head", appropriately using the alliterative metre seen elsewhere in the poems, which makes explicit the apparent contradiction between the pastoral and the political: the poem begins "if the river is a borrowed world / come then to land" and goes on to exhort "warriors of water" to "come in marching", thus interweaving the two strands found in this quiet pastoral sequence, which does in fact, as the best pastoral poetry has always done, directly address the politics of our times.