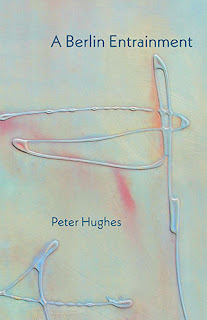 A new collection from Peter Hughes is something to relish and this one is no exception. The book is made up of two sections, the first of which employs a range of layouts while the poems in the second (‘A Berlin Entrainment’) are each comprised of three three-line stanzas on the right-hand side with a prose poem on each facing page. The poems are set mainly in Cambridge and Berlin and there’s a psycho-geographic feel to the whole project which embraces a sense of the out and about and the ‘immediate’. In fact, the poet Hughes mainly reminds me of is the late John James, a thought which is amplified by Hughes’ accolade to James in his ‘Life Writing: in memoriam John James’, the first half of which is I include here:

It’s a poem which James himself would have loved and the mix of hedonism and enjoyment of the sensual with a hint of political comment – ‘the gross stupidities of Brexit’ – is beautifully put together and also very moving.Hughes’ poetry is filled with humour, spontaneity and quick-witted accelerations and is hugely enjoyable to read. ‘In the art’ is a piece which responds to a virtual reality project by Fred Baker which enables the ‘viewer’ to ‘walk through a Klimt’, an experience which is reflected in Hughes’ writing:

It’s an almost synaesthetic poem which looks and feels of the moment and is very pleasurable to read.

A map of the Berlin rail network precedes the second section which is filled with evocative snippets. For example, in ‘Hermanstrasse’ we get ‘show me the way to the veg & pharmaceuticals’, where I couldn’t help but be reminded of Joel Grey’s ‘master of ceremonies’ in the film Cabaret, a suggestion which is enhanced in the following poem (‘Tempelhof’) where we get the phrase ‘wings of desire’, another reference to a film set in Berlin, of course. There’s also a strong ecological imperative in these poems, as exemplified in the following piece:

Fashions change and sometimes trees and people get in the
way, especially in Sheffield or the Amazon, where loggers
have no time to pee, and fewer trees to pee against or under.
The future’s bright and wears a vivid halo. Unwholesome
is the next decade’s top word and apocalyptic high-tides
evict the marginal. Move on up amid the ravaged and
regrettable. Radioactive nails scrape and delve.

The way in which Hughes suggests the interrelation between the mechanics of capitalism and its negative effects (‘Sheffield or the Amazon’) on both people and the environment is neatly done in very few words and the phrase ‘The future’s bright and wears a vivid halo’ also provides a succinct undermining of the ad man’s projection of a ‘fantasy world’ where everything will be well and bountiful. We are all complicit but it’s still worth pointing out the fact!

Hughes’ ability to mesh the pleasurable aspects of being in the world, taking it all with a sort of joyous inrush, is matched by his critical faculty, which also picks up on the bad things which are going on and which underlie much of our current crisis but he does this in a manner which takes note of the immediate and changing reality, drinking it all in, and exploring, to quote a line from MacNeice, ‘the drunkenness of things being various’. In the ‘thin poem’ ‘On Leaving Cork’ he does this in an almost literal sense with the lines: ‘announcing WINE / BEER COCKTAILS / & though I’ve never / had a wine beer / cocktail there’s a / momentary pang / as the bus eases / forward ….’ .

There’s a sense of continuum and speed of movement in these poems which while also embracing reflection and analysis, keeps the reader asking for more, turning the pages in search of those wonderful phrases and ‘trains of thought’ which keep the show on the road. I’d argue that Peter Hughes is a political poet in the sense that his oppositional project presents a defiance in the face of disaster and defeat which remains cheerful and full of hope. This is a hard thing to achieve in these increasingly difficult times and certainly feels at odds with some of the more overtly political poets now being published (Martin Hayes, a fine writer in his own way, comes to mind) but it’s very much in the ‘tradition’ of John James and this is something I feel Hughes should be pleased about.