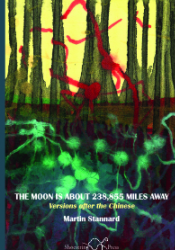 In the final song of Gustav Mahler’s Das Lied von der Erde (1909), ‘Der Abschied,’ (‘The Farewell’), the contralto sings the words: ‘I seek peace for my lonely heart.’ The words could easily stand as the motto for Martin Stannard’s new book, The Moon Is About 238,855 Miles Away, a beautiful collection of ‘Versions after the Chinese.’

The collection comprises loose translations, which have been ‘rework[ed] to some degree,’ of poems from the Tang Dynasty (618-907 AD). Some of these are by the same authors set by Mahler: Li Bai, Meng Haoran and Wang Wei. Indeed, just as Mahler’s song symphony ends with ‘The Farewell,’ which includes lines by Wang Wei, so Stannard’s collection ends with ‘A Farewell,’ and his version of those same lines:

I dismount, tie up the horse
And we settle down with some wine
And I ask where you are going, and why

And that I should ask no more questions

Both Mahler’s and Stannard’s ‘Farewells’ hold out the promise of an elusive transcendence – in Mahler’s case, the final visionary measures look to an eternally recurring spring, and a horizon which is ‘forever blue’; in Stannard’s case, the addressee of the poem looks forward to a return home to ‘South Mountain,’ and an ‘eternity of white clouds,’ where there will be no more questions. This promise – of eternity, infinity, eternal recurrence, of homecoming, of transcendent union of human with natural environment – haunts many of the poems in Stannard’s collection, like an unheard Mahlerian music.

And the music is unheard: ‘the music is stopped’; it is in the past, part of a dream. In one poem, the speaker ‘want[s] to make … music,’ but all that remains is ‘the consolation of whatever’ he or she ‘can dream.’ In another poem, ‘the song of the zither ends,’ and the addressee can only ‘inhabit the silence.’ This is a silent ‘country without music and beauty,’ except as something remembered, or dreamt of. It exists only as a promise – something transcendent the poems are reaching towards, either in the future or the past, beyond the text.

They are also constantly reaching beyond themselves towards human contact. These are poems which are acutely aware of ‘what it’s like to miss someone.’ Their secluded speakers are often ‘forced by circumstance to live alone,’ and ‘far from the world,’ so that ‘most days [they] … meet nobody’; while the poems’ addressees – past lovers, friends, family – are away in the capital, in the north, elsewhere. Still, nature again holds out the promise of a spiritual union which operates above and beyond geographical separation:

If the moon here represents the possibility of spiritual union, it is still, though, ‘238,855 miles away’ – and the poems often poignantly capture such ambivalence, through images which mingle both union and separation, closeness and distance, presence and absence. The ambivalence can even be internalised by the self: at one point, the poet-speaker declares: ‘I am full of you, the moon and great distances.’

So both within the self and without, it is possible to establish a virtual union with the absent other – and, for that matter, the moon, nature – through dreaming, daydreaming, a leap of faith or the imagination. In one poem, the speaker ‘can imagine remaining by that river forever, forever fishing, / While not wanting, deep down, to catch anything at all’: the speaker might transcend desire, achieve an eternal union with the landscape (the river), at least in imagination. If these poems ‘seek peace for [a] … lonely heart,’ they find it somewhere off the page, 238,855 miles away, in the moon, in the past or imagined future, in an eternity of fishing, in music which is always just out of hearing.

Or at least, that is the case for all the poems but one. Just as Mahler’s music seems to imply a kind of transcendence at the end of Das Lied von der Erde, so the poem ‘The Hard Road,’ towards the end of Stannard’s collection, seems almost to reach beyond ‘dreaming’ to an ultimate union with nature (and hence a kind of death):