Review - "Forty Four Poems and a Volta" by James Davies 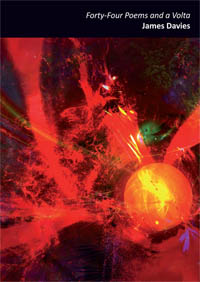 
I had to check and remind myself what a Volta was half way through reading these texts and its relevance to this intriguing short collection is still only partly clear. Humour is a major element in Davies’ work though, that and a strong inclination towards ‘defamiliarisation’, a term which explains quite well what he’s up to here, as although these short poems, one per page and each composed of two short sentences or stanzas, if you prefer, are made up of language which is syntactically pretty clear, the meanings are fragmented and infused with puns and linguistic ‘turns’. That, perhaps, explains the ‘Volta’ though the title is still a tad puzzling.


Take the following, for example:


what am i now but someone standing next


which bits can i eat)


You can read the second sentence across or down (or both) and apart from the word ‘mars’ is an entirely explicable if unremarkable statement. The formalism of the piece is constant and implies an ‘Oulipian’ approach to things and the use of singular in the second line of the first sentence – ‘to a lids’ in incorrect reference to the plural is the sort of shift that Davies makes throughout the collection. He often plays with ‘an’ and ‘a’ and the uncertain rules around the use of the indefinite article and humorously makes the point that euphony plus ease of reading (how it flows off the tongue) is the only rule that makes any real sense. As a reader (this reader, in any case) you are ‘encouraged’ to read these pieces through to yourself, either aloud or ‘in the head’ and as Tom Jenks perceptively says in his blurb on the back cover ‘It all makes sense if you let it.’ Read them through quickly, at a pace and allow the estranging processes to work their magic. Then re-read slowly and perhaps puzzle over the quirks and slipperiness of language – ‘that’s a tree / (i saw it)’ and note that even in such brevity there is a suggestion of the dark side as well as a lightness of touch and a humorous embrace.


Whether or not these poems are your kind of thing they won’t take long to read and they may challenge you, if you let them, in terms of what we think we know about language and how it works and what may actually be going on unbeknown to us.


I like these pocket-book collections from The Red Ceilings Press. There’s a great variety in the work, though mainly from the more experimental end of the spectrum and they are easy to read in a sitting and then ponder on to your satisfaction.