Review - “The Red Book of Hergest Ward” by Rhys Trimble 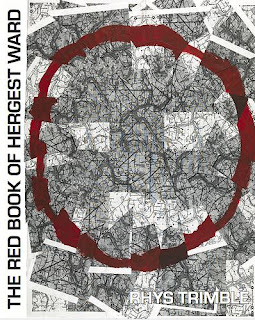 
Apparently before starting Paradise Lost John Milton set out to read everything that had ever been published and was still available at the time. An impossible, insane task, even in the 17th century but can you imagine somebody trying to attempt this now? A rhetorical question of course as information overload is as ubiquitous as air and in any case, nobody could live long enough to complete the mission. You get the feeling with Rhys Trimble though of somebody high on manic erudition/energy and this ‘magnificent tome’ is a testament to an obsession with language and with technology and with high-end visual presentation. This beautifully produced book is as much an artwork as it is a series of texts and is filled with procedures (Oulipo-based; homophonic work; computer programming and existing texts altered and plundered in a variety of ways) and with writing which suggests a visual performance allied to sound poetry. I’ve ‘gisted it’ twice as reading through the complete thing in a ‘straightforward manner’ completely defeated me and probably misses the point in any case. I found myself reading sections aloud to myself, hooting hysterically at times at the mix of archaic and modern (I believe Tom Jenks had a hand in this) and struggling with the pronunciation – there are sections which combine Welsh with English (‘colliderings’) – but on the whole having a reasonably fun time and when I was struggling I’d go away for an hour and do something else. My copy of the book came with a WARNING!! from Martin Stannard – ‘this book may cause headaches’. I know what he means but I think he may be missing out, at least to some extent! Please note my caution at this point in the proceedings. If you go with the flow and don’t take the whole project too seriously – though it is a serious project, if you see what I mean, given the degree of design and assimilation and arbitrary interjections – it’s possible to have some fun with this.


The Red Book of Hergest Ward is split into four sections, each with an introduction plus ‘explanatory notes’. I’m not going to go into detail here but again these appear to be deadly serious and at the same time open to ‘accusations’ of absurdity and inducing both admiration and also hysterical laughter. The themes and starting points are both historical and autobiographical, mixing a sense of organisation with one of chaos. You could read a disclaimer into the penultimate note on the final page which reads ‘page 15v / (deleted through mercy to the reader)’. So we’re into a gigantic game here, one that includes a colour reproduction of the Kiev metro (‘chosen because of an acquaintance with a Ukrainian person who I liked or at random to avoid the cliché of the London tube.’) plus a number of montage stimulations which may or may not have relevance to the final project. Trimble is part of the Anglo-Welsh avant-garde which includes poets as wide in range as Iain Sinclair, Peter Finch, John James, Lloyd Robson and David Greenslade but Trimble is pretty much out there on his own as far as I can see.


I don’t intend to quote systematically or in given order from the book to give the reader a flavour but an almost arbitrary selection of snippets may be in tune with at least one aspect of the book’s construction, that of chance, as opposed to its programmatic and process-based heart. If Frank Zappa could combine composition with improvisation I don’t see why Rees Trimble can’t do the same in a different medium. There are many literary allusions within, to early Welsh texts, to the mythology around the Trojan Wars (to Homer, of course), to Anthony Burgess’ ‘Russian dialects’ in The Clockwork Orange and to many other writers I’ve probably missed. Part of the fun of engaging with this book (I’m not going to say ‘reading it’) is to half recognise a snippet or suggestion and try and recall its echo, that is when you’re not struggling with a composite word which confounds pronunciation because you lack the necessary gall or language skills. Here goes then:


balletic or recitative – & what called you


to me & shaped your absence … think rar


e&my teeth against yours & fingers tight on


[a] grip–missing my boy/girl, can you feel the


dew on your forearms, hunker down in


the went woods … when you’re backs to


From ‘IV Membranaceous in Folio’ we have the following:


where the statistical headlines


The collision of mythologies, language and sheer chaos is also presumably a prompt for Trimble’s ‘sound poetry’ – I’d love to hear some of this material performed live. Finally we have another short section, this from ’xxii, The Red Book of Hergest Ward’ (p 35):


HELLUVA BORING our cyclicity hard by this


I liked the look of this book, its large format, its artworks, their textures and textual snippets and its overall design. As I’ve suggested earlier it’s the work of an obsessive, a perfectionist perhaps but one who is also open to the humour in such a grand project. I’m reminded to a degree of the work of Phillip Kuhn, similarly obsessive and intrigued by detail yet also able to send the apple cart careering off the road. Sometimes the apples fall in an interesting way, producing patterns and suggesting ‘meanings’. Sometimes they don’t but then all the better to provoke a response. Have a look at this book, admire its cover and its feel, throw it at the wall if you feel the need but you might just find something inside to stimulate a jaded palate. Or if you’re Martin Stannard it might just give you a series of headaches.