Review - "Below This Level" by Kelvin Corcoran 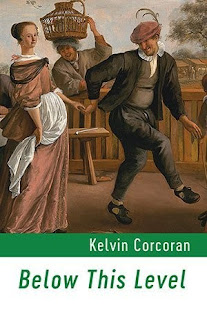 
Writing about serious illness is always a tricky business and one which includes the risk of sentimentality and cliché. The three sections of this short volume: Diagnosis; Treatment;  Afterwards, deal with a cancer prognosis, up-front and personal, the process of undergoing surgery and radiography and the aftermath in a manner which is both ordinary and extraordinary. Corcoran’s mixing of the down-to-earth with a lyricism all his own, together with an analytical aspect – also distinct within his work – makes for an engaging read and there are plenty of instances of high intensity where memory mingles with the here and now to produce flashes of what I’m going to call ‘revelatory moments’, akin perhaps to Wordsworth’s ‘spots of time’. I’m aware that I’m taking a risk in conjuring up such an epiphanic projection but it seems worthwhile as I’m reminded here of Dennis Potter’s last tv interview with Melvyn Bragg, an occasion filled with intensity as well as sadness. I should add quickly that the aftermath on this occasion appears to have had a much more positive outcome even though reflections on mortality engendered by such an experience can make us all aware of how lucky we are to be here at all and how our time should be spent wisely. The title refers to Prostrate Specific Antigen and is a reminder that it’s a good idea to get checked out if you think something might be amiss.


The book is set in Belgium (Corcoran’s home) and Greece, the latter where he appears to have been for the recovery after the treatment and also a subject which has featured strongly in his poetry for many years. The opening poem ‘What the Birds Said’ has some lovely imagery ‘….hear a collared dove coo, a buried piano, a distant aircraft.’ (my underline) and mixes a longing for childhood – ‘to run through the mortal trees with the fox and the rook.’ – with a sense of anxiety and something almost magical, as if the words are being used as a sort of ritual of protection, an evocation of hope in a time of danger. This sense is more fully realised, perhaps, in the wonderful short lyric ‘Let’s Leave’ which is quoted here in full:

Captain of the turning sea,
do you know the sound a boat makes
hauled up a shingle beach,
do you count through white noise breakers?

I would swim the Picasso Sea,
swim with the women, fish and goats,
ride the bull dripping on the shore
to Paris, Madrid, Barcelona, Antibes.


Memories are prized through sensual conjuring (you can so easily hear the sound a boat makes) and the evocation of modernism through its geography and via the wonderful ‘Picasso Sea’, an image which implies revelry and delight and a childlike embracing of the world, offset by the ambiguous yet possibly unsettling title which can have several meanings.


From ‘Treatment’ we have praise for the doctors and nurses who carried out the various procedures, a sort of hazy recollection of the pre-operation moment, tinged with anxiety, followed by a revelling in the immediacy of surroundings post-operation – ‘a block of window daylight’ and the sounds of Sibelius, together with conversations with the nurses from Romania, France and Holland:


In ‘Good Science’ we have more revelling in ‘the immediacy’ of the world, also a sense of the past ‘…. drown me in memory’, an emotionally high point engendered through the closeness of life to death, comments on the process of describing thoughts and feelings – ‘scooping out the bowl of language / good science burning my inside out,’ and finally a meeting with his wife, Melanie in the closing poem of the section – ‘We’ve brought your husband back/to you, the doctor said.’


The final section, ‘Afterwards’ is set in Greece and includes the basis for a letter to a friend, Ian, also, possibly, we presume, recovering from serious illness and again gives praise for the care he has received and references Pinker (Steven, I presume?) in terms of an optimism about the human race, despite the dark side. There are more allusions to art and to music via Glenn Gould and Roger Hilton where memory is again incorporated into the ‘here and now’ and a series of ‘images of growth’ – ‘the advocates of Spring dig dig the spreading mulch, / dig the mud, the tubers, the building block sequence / to find the roots of their own ascendency,’’…  which feel like a much more expansive and outgoing response than Eliot managed in The Wasteland. Emotions in extremis or its aftermath can prove an encouragement rather than a detriment it would seem. In ‘Singing with Chagall’ we have some lovely celebratory imagery, based upon the artist’s work – ‘Caught in the pink rush of flying fish, / donkeys and goats – did I say that, see that? / Chagall singing up the swoosh of it.’ – which mixes the demotic with the high lyrical with an apparent ease that is simple to overlook.


Given its subject this is such an outward-looking, optimistic and hopeful collection of poems that it’s hard for a reader not to be caught up in its celebratory onrush. Corcoran remains a great lyricist, one where thinking and beauty are intertwined without this seeming like the insertion of an alien object into the subject of art. I loved reading these poems and I hope you will too.