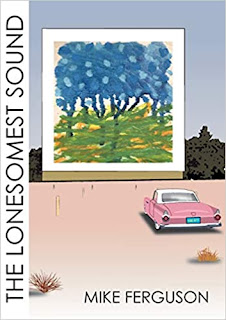 “The Lonesomest Sound” is a post-modern sonnet sequence. The sonnets are not in conventional form, in fact they’re prose poems, but the collection has many of the standard features of a sonnet sequence; discursive language, compression, and an overall theme. The opening poem of the book seems to act like a prologue; entitled “When Searching” it implies that the poems might be enacting a quest of some kind, but does so in typically irreverent tones;

“Find things, find love, find happiness, find peace. They are all in the wardrobe. Keep advancing the pages. To be reliant on the acquisition is to close all the doors.”

Indeed, that is what a reader of this sequence has to do; be open to where the language takes you, don’t close all the doors. The traditional sonnet-themes of mortality (“The Speed of Death”) and the passage of time (“Waiting a Long Time”) are present, and the seemingly random phrases in the poems throw up some striking lines:

“How science strips the Grim Reaper of his robes. Population dynamics and population genetics: go figure. The speed of death of light decay has its own abstract so there are other darknesses explored beyond our comprehension.”

But if there is an overriding theme to this collection, it's the interrogation of language; subjecting it to questioning, testing, parody and - as is clear from the exuberant nature of the pieces - celebration. The poet is revelling in what language can do, how it can create its own reality by association, random connection and musical phrase. Here’s an example, the full poem “Preserving Pears”:

"There are my vigilante moves in the early morning. Can I just use bourbon? Raiding a friend's tree is some kind of irony. Too many YouTube recipes eschew sugar. A 15-carbon skeleton at its core, fleshed out until disintegration / unless. When I come to check for falls, is it possible they hear me walking on gravel? Worms and birds have their own ideas. Phrenology of a fruit anticipating its longevity. She adorned with small squares of cheese, knowing and tempting. It is in the merest hint of self-sufficiency. Both the pear and the plum trees have become sustainable sonnets. As if a loanword can preserve its naming."

The title, "Preserving Pears", brings to mind a whole genre of poetry about baking, making jam, gathering windfall apples from the garden etc told in a straightforward ancedotal manner. “Preserving Pears” parodies that type of poem ("she adorned with small squares of cheese, knowing and tempting.") while doing something entirely different. The prose-poems in this book are unpredictable, lively, and full of zest for language; words and phrases spark off associations which lead down new and different paths. The phrase "Raiding a friend's tree" brings to mind Blake's "A Poison Tree", but we don't have time to dwell on that before the poem's momentum takes us on to YouTube recipes and molecular structures. I love the phrase about "sustainable sonnets" (which again satirizes a certain type of poetry) but it typically leads to a new idea about loanwords and naming, punning on the "preserving" of the title.

The remarkable thing is that each poem in this sequence of ninety prose-poems has this wit and raciness that makes it a pleasure to read. You're never quite sure what you're going to get, what associations will be sparked off and where a particular poem will take you. There's a spontaneity to the poems, and a feeling of improvisation. The titles are worth reading for their own sake: "Gristle on the Bolted Kitchen Door", "The Speed of Death", "There is no Such Thing As Nothing" being some random examples. The poem "About Writing Poetry" brought to mind a very compressed version of Kenneth Koch's "The Art of Poetry":

"Avoid sentimentality unless it prompts laughter. Shakespeare died to save you from trying to write like him."

The other thing to note about this collection is that the poems are never forbidding in the way that language-oriented post-modern poetry can sometimes be. They acknowledge the need to entertain. They let the reader in; they're witty and the disjunctions aren't too arbitrary and random. The poems are never solemn and don't take themselves too seriously.

It's possible to identify groups of poems with specific themes; the poem “Prodigal Son”, for example, ushers in some poems which seem to be of a more personal nature, which, while still being disjunctive in their language, are strangely moving. “The Prodigal Son” is almost a straightforward poem about that subject, but with slightly skewed language which can be moving without the meaning being totally clear: “you can love whoever or whatever without the need for a narrative”. Likewise, in the poem “When You Have a Disability”, we have “I wrapped her in a cocoon, letting in air and sunlight and food…”, followed by language in a similar tone, but prevented from becoming sentimental by the use of self-aware language-play:

“Of course, misreading is not an impairment but I found this momentarily salient – text anxiety is not considered a disability. Sometimes you have to laugh.”

The final poem is titled "Blue Trees and a Pink Thunderbird", and this is what we see on the cover (with a painting by Rupert Loydell) of this nicely designed book.