Review - Raymond Roussel, "The Alley of Fireflies and Other Stories" 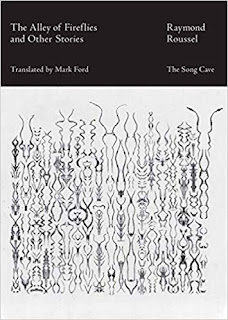 In 1989, a trunkful of previously unknown manuscripts by Raymond Roussel was discovered in a furniture warehouse. The find radically expanded our knowledge of his writing. Two documents of particular significance were a full draft of Roussel’s second novel, Locus Solus, twice as long as the published version, and a draft of a third novel: The Alley of Fireflies. The latter is mentioned by Roussel in the posthumously published How I Wrote Certain of My Books but appeared to have been lost.

The text of this draft third novel is now available in English in a fine translation by poet and scholar Mark Ford, along with two previously unpublished episodes from the full draft of Locus Solus, and two early stories illustrating Roussel’s use of homophonic puns to stimulate his imagination. This is the procédé Roussel describes in How I Wrote Certain of My Books, and is the supposed key to his oeuvre. Two phrases which sound the same when spoken, but which have different meanings, are used to generate a text capable of containing both.

Roussel began experimenting with this method in his early twenties, following the failure of his first publishing ventures. The two early stories included in the new volume date from that period. The first, ‘Chiquenaud’ (‘Flick of the Finger’), begins with the phrase ‘Les vers de la doublure dans la pièce du Forban Talon Rouge’ and ends with ‘les vers de la doublure dans la pièce du fort pantalon rouge!’ The first sentence means ‘the verses spoken by the understudy in the play The Galant with the Red Heels’ while the second means ‘the worms in the lining of the piece of material from the strong red trousers.’ Having created these phrases the author’s challenge was to invent a story to connect them.

This basic device became more elaborate in the later novels and plays, though as How I Wrote progresses Roussel discloses less and less about how his method developed. Not that this matters. Enjoyment of the extraordinary narratives and fantastical descriptions which characterise Roussel’s work doesn’t depend on us understanding the compositional method underlying them. The same is true of writers like Queneau and Perec. As Michel Foucault points out in his essay ‘Speaking and Seeing in Raymond Roussel’, the ‘key’ which How I Wrote Certain of My Books claims to offer the reader, doesn’t actually unlock anything.(1)

The Alley of Fireflies is fifty pages of draft material which shows Roussel in the process of composition. The work was begun soon after Locus Solus was completed, and consists of a series stories within stories, partly set at the court of Frederick the Great and featuring real historical figures including Voltaire and Lavoisier. This ‘bracketing’ of texts is very similar to the method used in Roussel’s last published work, the long poem New Impressions of Africa, which Ford has also translated.(2) Roussel’s poem places parentheses within parentheses, creating a Byzantine series of digressions in a work which is in fact a single sentence.

The text of The Alley of Fireflies is full of the fantastical science and faux antiquarianism typical of Roussel’s ludic style. It also includes an elaborate description of the use of aleatory methods for determining the outcome of a game, which anticipates the use of chance procedures by John Cage in music and Merce Cunningham in dance 20 years later.

Ford published a critical biography of Roussel in 2000, and is a recognised authority on the writer in the English-speaking world.(3) The Alley of Fireflies and Other Stories includes an instructive introduction, and the selected texts, almost all appearing in English for the first time, will delight Roussel fans. Ford says of The Alley of Fireflies: ‘the draft material reveals, for the first time in English, Roussel in the act of composing his hallucinatory fictional world, and its very incompleteness allows us the illusion, at least, of feeling a little closer to one of the strangest writers of all time.’