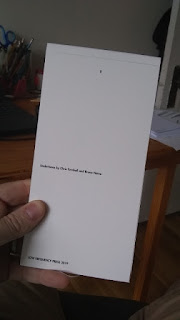 When I first saw this book, I was immediately put in mind of one of my all-time favourite collaborations, Supernatural Overtones by Ron Padgett and Clark Coolidge, a game of linguistic lawn tennis, where Padgett captioned ‘images’ created by Coolidge which were actually oblique, poetic texts. With Supernatural Overtones, you have the sense of two very different minds pushing one another into new territories neither would have found alone and you get this sense too with Undertones. I don’t know who did what in what order in Undertones and I don’t need to. There are clearly a number of processes at work here but to try and itemise them would be like one of those Behind the Music documentaries where they isolate Roger Water’s bass or explain precisely what Robert Plant was doing with his tambourine in 1975. The processes here do what processes should, i.e. serve as a means to produce a text that doesn’t simply demonstrate their operation but works so well that how it was made becomes secondary. Process ultimately needs product and Undertones, if you will excuse the slightly loaded term, delivers that product. Undertones is a fascinatingly elliptical elision, a dispatch from the borderland of sense and abstraction, saying and showing, the Venn intersection of two discrete yet complementary intelligences.

The text itself seems to be a blend of discovered and generated material, fragments of which fall into contingent, transitory confab on each page or panel. In the main, the top part of each panel appears to be largely based on found text, whilst the bottom part comprises a more abstract intervention. Sometimes this found material will be presented apparently unedited, for example:

which is met with the response:

in fact, hunger
for an evolution
or two.

Anyone sixteen or over who fishes in public waters is required to have
a valid fishing licence. Fishing licences can be purchased at most area
shops and
at department stores that sell bait and tackle, or online.

which is coupled with:

At other times, found material forms the basis but is not the entirety, having being adjusted, spun and fine-tuned to make it new, crosscut with observational data:

Often, as here, the bottom section text hangs on by the most slender, tangential of fingernails to the top section, using it as a starting point, an initial stimulus. At other times, however, the response is more direct and deadpan, as in a combination towards the end of the sequence where the top part comprises a verbatim lift of a call for submissions from a poetry magazine and the bottom comprises a copy and paste of that same call with the addition of a few numbers, with ‘WE WILL BE ACCEPTING SUBMISSIONS FOR ISSUE SEVENTEEN’ becoming with ‘WE7 WILL14 BE ACCEPTING SUBMISSIONS FOR ISSUE SEVENTEEN’. To return to the tennis analogy, if other combinations are a serve and volley, or a lob and smash, this is a wrong-footing drop shot that skims the top of the net. Who knows what these numbers refer to or if they refer to anything? What they do is remind us, as this sequence does throughout, of the materiality and codifying nature of language.

I’m conscious here that I’ve done in this review exactly what I said I wouldn’t do and gone full Behind the Music, dismantling, dissecting and separating. What I want to do now is, as it were, to put everything back in the mix and consider the text as a whole. This is rigorous, challenging, experimental work exploring what I think is the most interesting creative frontier in writing at the present time, which is the point where it shades into art and vice versa.  Undertones could easily be described as a work of conceptual art and could equally easily be described as a work of conceptual writing, driven as it is by ideas and underpinned by processes, even if those rules are never explicitly delineated. It’s also packs a real visual charge, smooth blocks of justified text juxtaposed with ragged interjections, beautifully produced by Low Frequency Press on thick, creamy paper, in a font that wouldn’t look out of place on art gallery labels. It’s bound at the top edge rather than the left, a subtle, slightly discombobulating deviation from the norm that jolts the reader from reverie and makes them aware of the corporeality of the text as physical artefact.

Conceptual? Yes. Thought-provoking? Absolutely.  Rigorous, challenging, experimental? Yes, yes and yes. But what Undertones also is, which doesn’t always accompany that list of qualities, is a pleasure to read. There’s a notion you encounter with experimental work that it should be ‘good for you’, like Wagner, wildlife documentaries or cod liver oil, that if you’re enjoying it you’re doing it wrong. This is a notion I’ve never subscribed to. For me, the best experimental work offers great pleasure to the reader, it’s just that it’s not ready rendered and placed in a sachet labelled ‘pleasure’. Undertones  is smart and slyly funny. It is processual, but these processes are utilised with fluidity and instinctive humanity rather than being strictures. Like Supernatural Overtones, it shows what can happen when collaboration works, conjuring a spectral third person that is neither one writer nor the other but is both.