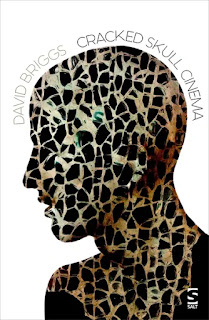 
David Briggs’ third full collection is his most interesting so far. These poems engage with his familiar cultural concerns and as the title might suggest there’s a skewed approach to matters which is very topical and immediate even when the references are located elsewhere. I’d go further and say that this book has a more ‘full-bloodedly’ political feel than his previous volumes and I think this reflects the turbulence of the times we are living through. There’s a sustained ethical base to these poems yet they mainly avoid didacticism even at their most overt (‘First they Came…’, for example, which updates yet echoes Martin Niemoller’s famous piece) mainly through what I’m going to call the ‘distortion’ of the narratives. These are intriguing poems which often puzzle and divert the reader’s attention, appearing to be saying one thing while suggesting another yet they are also powerful and moving pieces which work through a process of fractured memory and a mix of technical form. The collection’s title is no accident and this refers both to the personal and political aspects of the material.


In ‘Five Lessons’ we are presented with a guitar teacher’s assessment of a pupil’s development which clearly works as such at a surface level but also has a wider social meaning which relates to emotional intelligence, technical know-how and moral engagement. It’s also very funny and filled with wide cultural reference, as Briggs’ poems often are:

In this, your third lesson,
I should like you to compare the bars
of this lacquered fretboard
to Jacob’s ladder as seen by Milton’s Satan
from the purlieus of Chaos, at the edge
of created space. See how my fingers
scale the rungs like angelic messengers
between worlds.  ……….

The poem’s ending is truly glorious, harsh yet embracing a truth which still manages to sustain humour, at least I thought so:

Please leave today’s fee on the bureau, there.
I trust you understand me when I wish you
nothing but heartbreak, injustice,
ignominy and pain.

Briggs mixes up the formal qualities to great effect, as in ‘Grandsongs’, which combines a Prologue which is comprised of a short-line block, followed by some upper-case advertising snippets (I imagine some of these are actually ‘filched’ though occasionally you’re not so sure and it all feels very inventive) and several jaunty eight-liners which have a distinctive rhyme order. So, we have the following: ‘You came in a cold year. / Three of you. / The snows thick, / the woods loud / with opportunistic wolves.’ This is followed by references to Washington and Westminster (‘mad-eyed liars’) and three UPPER CASE triplets which include the following:

EVIL FELINE FINDS PERFECT MOMENT TO TRIP UP TODDLER
IS THERE SOMETHING FISHY ABOUR YOUR SUSHI?
COMATOSE FATHER PROVES HE’S NOT BRAIN-DEAD


At this point I feel some prior reservations about Briggs’ mixing of methods as I keep wanting him to ‘take-off’ in a much more random or even ‘programmed’ direction but I have to admit to have been reading a lot of Rhys Trimble’s work recently and it’s clearly having an effect on me. One enduring strength of Briggs’ work is that he does ‘mash it up’ a bit, something not everyone does and the combination of styles and of humour allied to ‘the serious’ makes for an adventurous read. At his best I’m thinking of a comparison with poets such as John Hartley Williams and I intend that as a compliment. In his more-jaunty style we get the following from II – ‘But if your will is firm and true / and you can read the weather, / there’s almost nothing you can’t do. / Be obstinate. Be clever,’ – which reminds me a little of MacNeice’s ‘Bagpipe Music’. The reference to Leonard Cohen in the Epilogue, combined with the frontispiece (‘there is a crack in everything; / that’s how the light gets in.’) adds what you might call a spiritual aspect to the whole poem and it’s a piece which accumulates and works as a whole on re-reading.


In ‘The Today Programme’ the assault is on ‘Dyspeptic white men on the radio’, a poem which really gets going with its use of repetition and focussed rant on a much-deserved target, while ‘the desk’ is a more reflective poem, playing with form and with memory. ‘Arboretum’ has a dreamy, atmospheric feel, slightly surreal and tinged with disturbance – ‘to cork me among the unsleeping dead’ – while ‘Quiddity’ utilises open field layout and mixes lyric with scientific observation, not a great poem but effective in its way. ‘Somewhere in the Multiverse’ is more meaty, filled with literary references and a dreamy humour which concludes with an unexpected sentence which evokes Music Hall and TV comedy – ‘It’s / legend now that Virginia Woolf advised Eliot and / Pound against leaving the stage that final time in a / skip-dance rendition of ‘Bring me Sunshine’. Which reminds me of Laurence Olivier in Osborne’s film version of ‘The Entertainer’. Which also brings us back to the title of Briggs’ collection – ‘Cracked Skull Cinema’ in a circular fashion.


This is definitely Briggs’ best book to date and the elements which first attracted me to his work and also those which gave me some concerns are still apparent. In the case of the former, his poetry in this collection is heightened, more engaged with the politics of the time and also, as in ‘In the Old Neighbourhood’, reflective in a deep sense. There is complexity and intrigue and enigma aplenty here and a sense of paradox, as in ‘Air Canada’, which mixes high-end experience with longing and desire and a sort of bathos, if that’s the right word. Briggs argues with himself, eloquently and in an engaged manner and speaks for what’s best in us while contemplating the worst.