Review - "(the book of gathering)" by Mark Russell 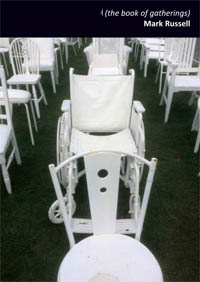 Mark Russell’s latest pamphlet, ᚮ (the book of gatherings), is a book of ‘wisdom’, though the comfort it offers is circumspect, humorous, enigmatic. It is ‘sage’ advice, as the opening poem explains:

The author steers us away from worldly aspirations, false pride, regrets. The sixth poem opens: ‘doubt nothing but learning/avoid too many ambitions’ and ends ‘see off retrospection/kick it to the wild pasture/drink it within an inch of its life’.

But how much of this spiritual guidance are we meant to take seriously? Russell undermines our confidence as readers through subtle shifts of tone. Poem twenty suggests that the wise favour doing over speaking: ‘words are second to actions’. And in what reads like a parody of a Zen master, poem fifteen advises:

Alongside the ‘philosophical’ verse are prose passages describing a mysterious ceremony involving the exhumation of ‘the grandfathers’ and the reappearance of ‘the grandmothers’. This is a ‘blue riband’ event, we’re told in poem eight, a kind of race. It’s filmed by a TV crew (poem nine), though with the appearance of the grandmothers ‘nobody has the heart to cross the tape’ and the contest proves ‘hardly memorable’.

The grandmothers are figures of power, the bearers of true wisdom. ‘The grandmothers know many things:’ says poem seventeen, ‘how to keep a man hungry; why her sons are easily distracted by horses and alcohol; why her sons use out-of-date fruit for the celebration cake; when to remain silent; when to resist correcting mistakes.’ The grandmothers choose their moments to offer counsel, though they ‘suspect the men may never take their advice.’

The world the poems inhabit is one of alienation and meaninglessness. Poem nineteen offers images of ‘many-tiered ornamental imitation temples’ and of ‘street signs…elevated to mythic status’, the paraphernalia of Debordean ‘Spectacle’. ‘You infuse each knick-knack with profundity/it is a hopeless cause/you know it is’, says poem twenty. Perhaps there is a sense here of a lost inheritance, a disconnection with past generations.

Eventually the grandmothers have to be reinterred, a process which is ‘exhausting but necessary,’ and ‘may involve’ the women’s sons having to overcome their own sons. The grandmothers’ last words are ‘stay on your feet, keep the lights on’, an exhortation simply to hang in there. Meanwhile the grandfathers have ‘stepped out’ and not come back. ‘Was it for milk and cigarettes,’ the poem asks, ‘was it for whoring and gambling. Everybody knows but nobody will say.’

I love the cool, deadpan humour of these poems, the critical awareness and lack of pretension. Russell has a great talent for highlighting the absurdities of life, the futility and emptiness of social aspirations. The dark comedy of his writing offers us a way to ‘keep the lights on’.