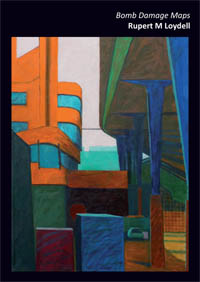 "Bomb Damage Maps" by Rupert Loydell, pub. Red Ceilings Press. 34pp.
When I see a new book by Rupert Loydell I wonder which Loydell it'll be. Over a long career he's turned his hand to a variety of styles, from cut-up and collage to realist monologue to meditations on the Virgin Mary and examinations of modernist art. "Bomb Damage Maps" finds Loydell in social-documentary mode, taking us on a journey through London on the A40(M) elevated road. This book is at one level psychogeography, an overused form, here redeemed by the element of parody and the justified anger at social injustice. The booklet consists of seven poems, the first entitled "The Lore of the Land". In this poem, Loydell lightly parodies the earnest tone of the psychogeographer:
On other occasions the people did
convince themselves of intentions
to uprise and take back control
but apathy and commonsense
soon sent them back to work

It may sound plain, even conversational, but Loydell is attuned to the nuances of language. Right from the opening line, we are slightly disoriented; talk of "other occasions" implies a current occasion, but we're not told what it is (yet). The tone is prophetic ("the people... uprise and take back control"), but the Brexit slogan keeps it grounded. Later, this tone is continued, but the prophet is speaking in soundbites and deliberate cliche ("Questions remain unanswered / answers remain unattached... Let the show continue, let bygones / be history and history be gone"). There is bitter irony here, which continues into the next section, "Topographies" in which a world is made of maps, but "She owned no right of way,//was no safe passage marked / across her land"). The theme here is the plight of the powerless of West London, whom the A40(M) flies over. All of this is leading up to the main concern of this sequence, which is the Grenfell tower and its "24 floors of incendiary backfire":

24 floors which could have been
saved, 24 floors that are too high
for normal habitation.

This central section, entitled "High Rise" is direct and angry, and is made all the more effective by Loydell's conscious use of different linguistic registers, which prepare the ground for this section and build on it in the last three sections, so that the result is more than just reportage. Grenfell is seen as part of the larger world of West London, and as a culmination of social problems and injustices. The section entitled "A Windscreen on the World" is particularly powerful with its Gothic invocation of lost souls haunting the Western Avenue extension road:

...a little girl has been reported
to weep, slam doors and run along the fast
lane, overtaking drivers

At the end of the sequence, in the section "Underneath" the poem returns to the prophetic tone, enacting a ritual mourning and call to arms:

Will stand all night until
time comes to the rescue, have no
other home but here. Will walk nine
times around the open fire, then lay
my head on the turf. There are both
women and men among us, we are
a living company and will be here
as long as it takes us to die.

"Bomb Damage Maps" appears to be in the territory of reportage and social commentary, but as always with Loydell, it's not quite what it seems; or rather, it's more than it seems. The variety of idioms between each of the seven sections keeps the reader unsure of what they're reading, making this sequence of anger at injustice work on many levels.
copyright © Alan Baker, 2020