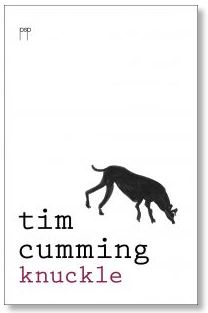 The ‘knuckle end’ is the sweetest meat on a leg of lamb, a fact included at the end of Tim Cumming’s end piece by way of a belated introduction to his latest collection. The sparse, neatly-designed cover includes a basic silhouette of a dog, possibly scavenging for bones. I’ve not read an entire collection of Cummings’ poetry since Apocalypso and that feels like centuries ago but I thoroughly enjoyed engaging with these poems which are strangely detached from the moments they are in without being in the least uninvolving or lacking in interest. I hope that makes some kind of sense. Whether in London, Budapest, Dorset or simply in an ‘unnamed room’ Cumming manages to create a present in which the past is forever hovering, in which memory and describing the ‘here and now’ are intermingled in a manner which combines sharp observation with an almost penumbral, dreamy vagueness. I’m not quite sure how else to put it but the ‘effect’ is seductive and charming while also, at times, being quite disarming, almost alarming. Take this short stanza from his long, final poem, ‘The City Inside’:

Shakespeare was running through me
on the Kilburn High road
in the spring of Seventy Eight
when I was in my Punk pomp
pistols firing on four cylinders,
London swinging like a storm lamp.

The book is split into six sections or chapters and the penultimate of these ‘Applied Arts’, seems to be based on a period spent in Budapest in 2014. I was particularly intrigued by ‘Elevator’ which has the backdrop of a film script (many of these poems are very cinematic) and I kept thinking that I’d heard some of these lines before or in a dream. Carol Reed’s eccentric camera angles in The Third Man kept flashing into my head and the mix of historical nightmare – ‘Last night, my wife dreamt / she was a Jew and Germans / were pounding on the door’ – with the present, where the click of the elevator light coming on brings us back to ‘now’ even though the framework and environs suggest an earlier period of 20th century experience, is beautifully managed and a touch spooky. Cummings’ earlier poetry, in my memory at least, was much more gritty, urban, hard-edged and even hard-boiled in terms of its clipped language. There’s still a suggestion of this here but the work is much gentler, more lyrical and its mood, though often interrupted by dark hintings, remains that of an overall dreaminess with the dream’s strange merging of the ‘razor sharp’ with the nebulous or unformed.

In ‘Chiron’ from ‘Other Planets’ we are placed in the café Zanzibar (which could be anywhere) where we have ‘Men with bad teeth, / men with small feet, / hundreds of men in one room / and all of them sober.’ The surroundings are suggested but any meaning in the experience or description is down to the reader’s interpretation as the final lines do little to explain anything but rather add an edge of possible mystery:

A man comes in selling sandals
and women’s shoes. He doesn’t
linger long. He doesn’t look like
he believes he has a chance.

Make of that what you will.

‘The Room’ further investigates the dark side with a minimalist ‘narrative’ where the key elements are ‘a couple of women, whiskey / and a gun.’ The final lines again leave the reader floundering and having to speculate as to the story being half told – ‘And something else. Something that told / me I shouldn’t have gone into that room.’

Impressions of bodies on the mattress lasted
for days, weeks even, after you’d left them.
I looked down at her body under the sheet.
The alley running down the back led to
a small square where it was dark and quiet,
one steady blue light in a pharmacy.
I was packed and ready to move on.
At daylight, the sound of milk being steamed
in the café has an almost human inflection.
A street cassette plays music
you will never forget or be able to hum.

The mix of everyday description with something more out of the ordinary tips its cap towards the detective fiction genre yet there’s a quiet lyricism here which is also part of the package, the furniture, if you like. ‘The sound of milk’ having ‘an almost human inflection’ is closely observed yet slightly strange in this context and the final lines leave plenty of scope for the reader to explore and use his or her imagination to complete a possible narrative. These poems are not quite as puzzling as say Ian Seed’s mini-fictions often are but suggestive and evocative, mood poems which have echoes of places you may or may not have ever been.

In ‘Names for the Wilderness’ the first long sentence is packed with information which both relates to ‘the public sphere’ and presumably in an autobiographical way to the author’s own memory and relation to these events:

Between the first album and Freewheelin’
Bob Dylan hears Martin Carthy sing
The Ballad of Lord Franklin upstairs at
the King and Queen one winter’s night
on Cleveland Street, 1963, every letter of
his name the head of a trail of breadcrumbs
through the north wind, sea tales indented by
the following sad refrain: I dreamed a dream.

The connection across time, encapsulated in the moment, has an almost mythical feel which is highlighted by the italicised ending of the sentence which refers of course to Martin Luther King’s empowering speech of the same year. What the individual reader makes of this is of course up to him/her but it’s a powerful evocation which is beautiful merged and is a good example of Cumming’s ‘method’ when applied to the here and now and its relation to the past. There’s a flood of evoking going on here yet its mix of the personal with a wider sense of the world is quietly astonishing.

The final poem ‘The City Inside’ with its movement through London and again its resonance through time reminds me strongly of sections of Ken Smith’s magnificent long poem Fox Running and I certainly mean this as a compliment. Its cinematic sense and geographic referencing, allied to a mix of characters (the well-known and the unknown) across time is thoroughly engaging and also includes the poet’s own intervention, his personal stake in the business – ‘Can you hear me shouting from this far away? / Which one of us is a member? / This is a recorded message.’

The layout and design of this book is terrific, the headings and typesetting nicely balanced and the cover image minimal and effective. I’m very pleased to have reconnected with Tim Cummings’ poetry and can thoroughly recommend this new collection – it’s a humdinger.
Copyright © Steve Spence, 2020