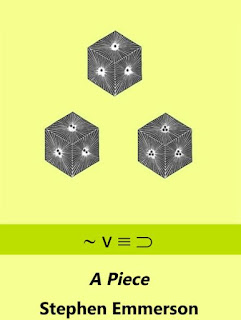 “A Piece” is a process poem based on Robert Creeley’s sequence and also using the dictionary via a variation on the Oulipo technique of word replacement. The length of Emmerson’s sequence is decided by the method and the method itself appears to give rise to a mix of composition, decided by a strict if somewhat ‘arbitrary’ process, allied to a degree of improvisation: control and freedom, the twin planks of such an exploratory work.

Once again in a publication from IF P THEN Q we have the extraordinary evidence of a ‘monster volume’, 474 pages in this instance, with one three-line poem per page, each poem range left at the top of the page, leaving a vast expanse of empty space to contemplate. A heavy tome indeed. And yet there’s a lightness of touch about the project which seems at variance with both the method and the ‘epic’ size and weight of the product itself, somewhat in tune with Creeley’s own minimalist lyrics. So there is humour here, as well as serious intent, in both the construction and the material end-result, as well as an element of homage in its starting point.

Here we have three of the poems by way of example, picked out by a degree of chance allied to a linear progression through the book:


One of the thoughts generated by this kind of composition is how the process can create an infinite number of options or juxtapositions, if you will, an endless array of possibility and invention, which again might seem at odds with the mathematical element involved. IF P THEN Q have form in this arena, Peter Jaeger’s book based on a re-ordering of elements from Proust being an example.

You can dip in or read through in consecutive fashion and while this approach won’t appeal to everyone its playful disordering of expectation is a breath of fresh air and at the very least provides an awareness of the processes involved in the creation of art, whether unconscious or more formally programmed. It may also suggest ways in which other ‘less formalistic’ writers might incorporate aspects of this method into their own work, hybridity appearing to be an increasingly ubiquitous element in contemporary poetry.