Review - "The Four Colors" by Ankur 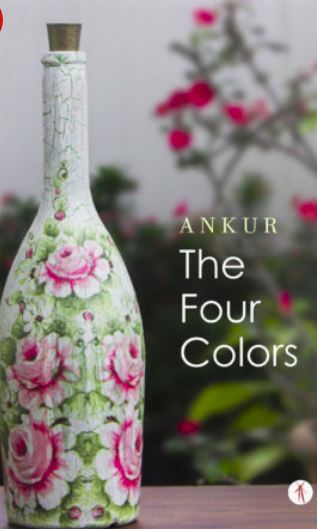 Ankur is an Indian poet, based in Norway, who writes in English. The fragmentation and prismatic refocusing of culture, language, heritage and identity creates a poetry in which sensory immersion and tactile response to the often brief page-life of the verse matters more than syntactic or imagistic traditionalism. Indeed, the immediacy of Ankur’s work, and his marshalling of it in this debut collection into colour-themed sections, each keying in to specific emotional states, threatens to invite comparison to Rupi Kaur and the current school of Instagram poets. But whereas Kaur pitches her output as bouts of social-media friendly aphorism, Ankur engages on a deeper level with poetry as a vessel for the senses.

At times, this results in a reading experience akin to wandering in a rose garden on the most pollen-heavy day of the year: the colours are vivid, the perfume intoxicating, the sheer beauty of the setting undeniable; but also a sense of being overwhelmed. Granted, there are enough poets out there who deliberately aim for such an effect and this is where frank criticism is important, in allowing us to weed out the worthwhile from the second rate. With Ankur’s verse, I feel that it is the tripartite influence of language, culture and identity that yields such unique and sometimes gauche results.

Iconic novelist Alan Sillitoe wrote his debut novel, and outright masterpiece, Saturday Night and Sunday Morningwhile recuperating from TB in Soller, Majorca: it was almost as if he were able to evoke the streets of Nottingham with incredible sensory precision precisely because he was so far removed from them. Ankur, resident in Oslo and using English as his poetic voice, reaches back to his homeland and conjures an India that is mythic, mystic, colourful but dangerous; a place both timeless and out of time.

The corners where we stand

were those Magellan could not find, nor Stanley,

the places where the disease never struck,

where white thought could not find its way ...

Behind the sagebrush, old towns of murder sleep in ...

with the river’s sharp, snakelike thunder ...

... India and Ceylon, where the tigers meditate

and the elephants rumble ...

Now, I’ll leave it up to zoologists and linguists to debate the poetics of meditating tigers and rumbling elephants, but for me even the moments where Ankur shoots for the moon and doesn’t quite make it, the resulting poems yield strange and haunting phrases that contribute to an overall sense of interconnectedness within the pages of The Four Colors. This is the Ankur aesthetic to a tee: he refuses to be hamstrung by the contemporary obsession with workshopping and endless revision, and as such performs a high-wire act between moments of almost naive sentiment and examples of poetic compression (as in ‘An Autumn Storm’ or ‘Moonshine’) that are highly effective. Grammar police might find reason to carp at some examples of syntax, and there are occasional idiosyncratic choices re: lineation, but The Four Colors rewards, particularly if taken slowly, savoured, and enjoyed for its quirks and its unexpected explosions of language.