Review - '#LoveLikeBlood' by Sascha A. Akhtar 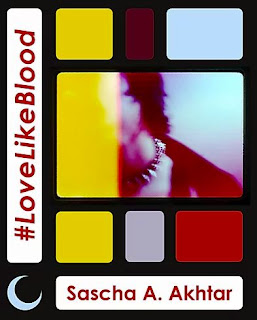 This large-format book is expansive, wide-ranging and linguistically adventurous, and gives the reader an impression of energy and scope. The poems range from diary entries to large-scale poems that sprawl across the page, to visual poems, and collages combining text and images. Underlying all of the work is a feel for language that enables the poet to deliver rhythmic, musical phrases that demand to be read aloud.

"#LoveLikeBlood" references pop culture (the title apparently a 1980s song title), literary culture (references range from the Orpheus & Eurydice myth to JG Ballard's "Crash"), politics, and personal experience (such as a girlhood spent in a Catholic boarding school). There is also a successful concrete poem combining comment on the recent repression in Turkey while at the same time refencing Sufi culture and Dervish dance.

Akhtar was born and raised in Pakistan and now lives in Britain. English was her first language, but she speaks and reads Urdu. This mix of cultures is important to this work, giving it a wide range of cultural reference, as well as an awareness of race and identity. One poem, entitled "PostColonial Theory" is a musical and rhythmic meditation on identity, which, without resorting to literal description, conveys a feeling of trying to reach or preserve an identity in the face of its denial:

not a greek myth

This sort of writing seems so much more powerful than straightforward description of injustice or privilege, implying much more than it spells out; at times, the poem gets more direct, but even here, the poetry is ambiguous, even playful:

a humiliation
is not a super-power
i is

& i gets what i wants
when i wants

In the centre of the book is a collaged poem, of which the title gives a succinct description: "Texted Plein-Air Poem On Bond Street Spliced W/Communist Manifesto". Combining the logos and catch-phrases of capitalism with the still-relevant rage against injustice of the manifesto works to make a statement that is at once political, visual and poetic. Here's a sample: 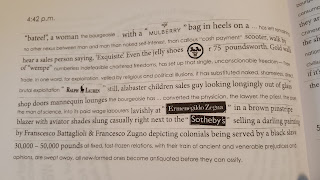 The book makes extensive use of collage, a technique which is easy to do badly; in Akhtar's case the collages can be surprising, funny and angry, thanks to her skilled choice of content and feel for what works in the juxtaposition of language. A particularly successful example is the piece "Retractable Patio Awning Systems", a great title, which is subtitled "American Road Trip Collage Poem". Here's the opening paragraph:

sometimes a bartender and a librarian can
serve the same purpose. PETS ON THE
GRASS WILL BE SHOT. The fewer buildings
you blow up the fewer you have to rebuild.
The possibilities are legion.

It continues in the same vein, managing to be funny, while at the same time a snapshot of the dysfunctional world which is twenty-first century America.

The language in these poems is often gothic and eerie in a manner reminiscent of Geraldine Monk in her 'Ghost Sonnets' or her long sequence 'Interregnum'. This is true even in poems apparently about personal experience, like the poem "Autobiographia", which has the subtitle "an account of a traumatic time spent in an archaic Catholic boarding school". Where we might expect anecdotal detail, we get atmosphere and sinister invocation with a faint echo of nursery rhyme:

This technique is used throughout the collection in poems ranging from the love poem "Heartwood" to "Freak Breech" an angry poem dealing with the post-9/11 experience of "a decade & more of bullshit and hearing random stories of 'brown' people being questioned, incarcerated & being asked stupid questions...". Akhtar's range can be seen from how she switches between such engaged political poetry to the language of religious extasy in the poem "Thangka Number1 'Bardo'", a collaboration with the artist John Alexander Arnold which starts with language reminiscent of the Bhagavad Gita and ends with:

It's difficult in a short review to convey the breadth of this collection; there are love poems, poems of political anger and a powerful long piece on Japanese atrocities in China during World War Two ("The Rape of Nanking by Men, Comforted by Rape"). And there are touching personal poems, like the six-page sequence "Poems for Eliot", a love poem that extends into the philosophical, spreads over the page as a visual poem and uses repetition in a powerful combination. The visual impact and layout of the poems are crucial to their effects, and it’s therefore good that the design of the book and the overall production of it is well done by KFS and undoubtedly enhances the text.