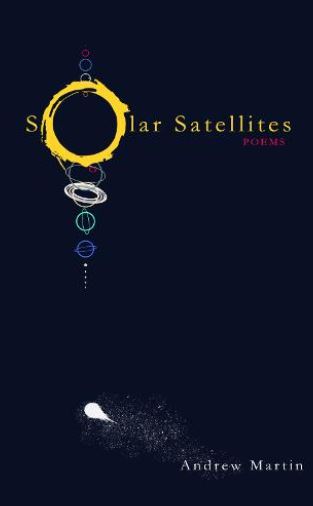 This chapbook from an emerging talent follows on shortly after Andrew Martin’s debut collection Shoals of Starlings, published recently by Waterhare Press. Martin, a poet whose visual artwork is closely allied to his poetry has taken the subject of the solar system as his next project and the seventeen poems here represent his minimalist take on a ‘big subject’. Scientific knowledge, wonder and philosophical speculation merge here in these brief verses which also combine a lyrical melancholy with a playful approach to language. Metaphor and simile are allied to humour and a sort of ‘human projection’ which largely avoids mythical/classical reference in favour of a pared-down intensity which is refreshingly different. The layout, typography and cover-design, all by the author, are an integral part of the project and this small book stands in wonderful contrast to Shoals of Starlings. There’s a vulnerability here as well which appears to be a regular feature of his poetry and certainly adds a dimension in terms of feeling and sensitivity.

but if you look close enough

you can see the scars

There’s an unexpected pun in the arresting opening of ‘Sun’, in ‘Why not daughter?’, a poem which intriguingly, in a few lines, combines a contemplation of time and space with a very human aspect and is filled with good lines – ‘drunk out of your heart’, for example – including the wonderful ending: ‘stain rooftops with laughter / from a baby girl’.

Barely touched by the Sun

forgotten by the fire?

to be seen just once

From ‘Earth’ we get (2.) – ‘Everything just right / size / distance / time / perfectly placed’, which is just about a perfect encapsulation of where we are in the universe. In ‘Haumea’, images of isolation combine with a sense of speed and movement – ‘quivering like a quill’ – which comes from what we know of the subject allied to wordplay and effectively applied simile.

Martin has a knack of opening with an interesting question – ‘Is there a right way up in space?’ (from ‘Uranus’) which is followed by some very visually inspired imagery – ‘centred ice skater / scratch spinning on your hands / smearing your face / out of existence’. These poems are filled with inventive phrases, minimalist description, humour and a sense of fragility which is nevertheless very winning. There’s a brief Notes section at the end which gives enough factual information to enhance the poetry. I love his work and look forward to seeing more from this prolific and enterprising writer/artist. I hear on the grapevine that his next project may relate to the Nocturne, which will no doubt feature written variations on a musical and visual theme.