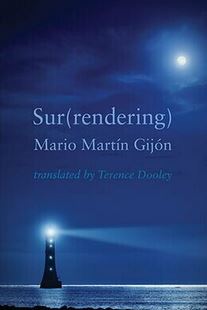 Sur(rendering), by the contemporary Spanish poet Mario Martín Gijón, plots the trajectory of a relationship from the end of an intense affair, through a period of separation and turmoil, to a passionate reengagement with the lover. At the end, in this new-found union, the poet discovers a fuller sense of self.

The book consists of sequences of short, concentrated lyrics which make extensive use of assonance, rhyme, alliteration, repetition and word play. Words may be broken across lines or exist as compound forms, as in au(es)sencia (ab(es)sence in English), and conju(r/nt)os (combining the sense of being united with conjuration or incantation). Language here is pushed to the full extent of its expressive possibilities.

Terence Dooley, whose English versions face Gijón’s Spanish in this parallel text, finds a good balance between rendering the meaning of the text and staying true to the form. This juggling act inevitably involves compromises and the English sometimes departs from the Spanish as the translator works to produce a readable English text. Dooley translates conju(r/nt)os as tog(e/a)ther, for example.

For a non-Spanish speaker, reading the English versions does give a clear sense of the sweep of the text. The first long section contains poems concerned with the pain of the beloved’s absence. There’s a strong sense of both mental and physical pain in these verses. The poem ‘in the houseless house’, begins:

Disdain of days in

The second, equally long, section reflects a period of separation and emotional disconnection, during which the poet losses his sense of ‘self’. Here finding words to express this confusion becomes a challenge. On page 75, an untitled poem concludes:

I live without love

I lose the use

The third, much shorter, section presents the intense reconnection between the couple. These poems focus on a shared sexual absorption in the other. The poem ‘(be)li(e)ving in pleasure’, starts:

our bodies hunting down

In the brief fourth and final section Gijón includes lines from Paul Celan, quoted in the original German. Some of these quotations relate to Celan’s complex relationship with Ingeborg Bachmann, which began with a brief passionate affair in 1948, rekindled when the couple met again at a conference in 1957.

The poems on pages 110/111 and 120/121 include German text by Gijón. The title of the very last poem ‘werdederdubist’ is a compression of ‘Werde, der du bist’, Pindar’s injunction to ‘become the one who you are’, which Nietzsche adopted as a motto. This final section of Sur(rendering) celebrates Gijón’s union with the woman he loves, and his discovery of a new kind of freedom.

Inevitably much is lost in the translation of these linguistically complex poems. Gijón’s text seems to me generally simpler and more concise than Dooley’s translations. It is almost always impossible to find an equivalent in English for the compound words in Spanish, so the translator is forced to look elsewhere for opportunities to employ a like technique in English. At times extra lines have to be added to reflect the complex associations generated by the Spanish text.

But such strategies are unavoidable. For a reader like me, with poor Spanish, these translations were a huge help. Struggling through the Spanish poems left me wishing I could better appreciate the nuances of the original texts.