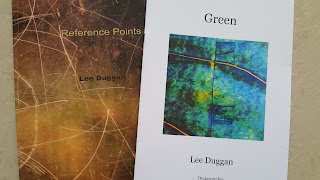 In her debut collection "Reference Points", published in 2017, Lee Duggan assembled a collection of lyrics which adapt Charles Olson's composition by field in a specifically feminist way. Duggan has written about the influence of poets like Alice Notley, Joanne Kyger and Diane di Prima and how these women writers respond to traditionally masculine forms, and has said about Denise Levertov that her "organic approach characterised her unique style which came from a belief that form is to be found in the natural chaos of human life". The poems in Reference Points use the white space of the page to give a sense of female lived experience, and of place and domesticity. The scenes it presents are impressionistic, the poems refer to love affairs, the raising of children, loneliness and scenes of quotidian life against the backdrop of the Welsh landscape and the passing of the seasons. All of this is done in the context of modernist poetics which inevitably interrogates language, in particular the language of the poems themselves. In a number of poems these concerns come together, as in this, the complete poem "making space":

There are a number of short lyrics like this, but it's in the longer poems - up to six pages - that the language has room to take off, using the full space of the page and achieving an affecting lyricism. Short extracts don't really do the work justice, but here's the opening of the six-page poem "seams":

Elsewhere there are close observations of the natural world in which the beauty of the phrasing matches what it describes ("loop bird call bluer skies open to summer"); but these are not simple description, as they're interwoven with random thoughts, details of domestic routine and other distractions which take the form of switches in tone and vocabulary, giving some of the poems an almost collaged effect. They also give a strong impression of a specifically female perspective, in line with Duggan's stated aims, mentioned earlier. The language can range from this freewheeling consciousness-stream to a poignant six-line letter to a lover entitled "Dear Sir".

One of the strengths of this collection is the way the poems combine detailed notations of everyday life with commentary on the writing process. The movement between the two is unforced and can be very effective. In the poem "what's left", a series of list entries ("2 kids / no voice / 3 jobs / 4 courses") are woven with self-conscious writerly phrases  ("bear all for nothing / attract a reader who may love me better") including the significant lines:

which summarise the intent of the poetry with their allusion to Emily Dickinson's "I dwell in Possibility".

While "Reference Points" includes among its discourses the language of the everyday, including snatches of conversation, letters and messaging, that of "Green" is more abstract and also more purely lyrical in the sense that it depends more on sound effects and upon the happenstance of lyrical conjunction. "Green" is a single long piece split into eighteen loose stanzas. The impression it gives is of narrating a walk through a landscape, perhaps from morning to evening while at the same time echoing a day's events and experiences, the two things being separate but intertwined. Here's the opening:

bridging
what is
to walk
out of
edgeland

outdoors I am
liminal
bridging
what is
comfortable

There are motifs that run through the piece, one of them being Italy, that is, fleeting references to it, or to its literature:

elsewhere we have "another Laura / on another line" and later the phrase "viva ancora" (still alive), and "re-read Paradiso / as if for the first time". But the Italy is of the imagination and other references root the text firmly in present-day Wales:

the dipper out of place
in reds & greens

There are brief references to the Virgin Mary, and the poem also implies a merging of the landscape with language and by implication, the poem's speaker. Again, this is done with the lightest of touches; "these lines which define me" and "iris lined patches / fields & defined conversations". But the most persistent motif running through the piece is that of music, which is first picked up in the second stanza:

The poem itself is a lyric, or a series of lyrics, so the musical references are at one level a self-referential reflection of that. At the same time, the experience of passing through the landscape is expressed in the metaphor of music in a way that reminds the reader of the last part of Basil Bunting's "Briggflats":

washed out
until the music starts

which are beautiful lines whose lightly implied reference to domestic tasks take us a long way from the male-oriented world of Briggflats. As is probably clear from the quotations in this review, it’s easier to quote from the luminous passages in this piece than it is to write about it, which is often the case with purely lyrical poetry. As the musical metaphor implies, the best way to read this sequence is to treat it like a piece of music, enjoy the sound and rhythm and the exquisite phrasing which lead to moments of emotion in which the life of the poem’s speaker is seen through the veil of language:

burning my throat
in the 5th movement