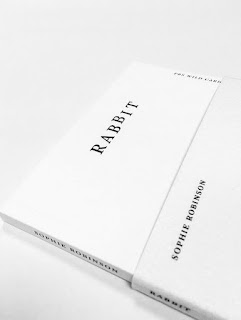 Sophie Robinson has said about her poetry that it is “…influenced by a lesbian and feminist canon - writers, artists and philosophers such as Adrienne Rich, Kathy Acker, Cindy Sherman and Judith Butler have a great influence on the way in which I work through the politics of minority identities in my writing”.

And in a 2012 interview on Jacket 2, Robinson said "Through my writing I try to foster a sense of intimacy and vulnerability, often using direct address and ruptured forms of the confessional mode. At the same time, I try to make these things strange or new through incorporating the violent language of the corporation, of globalization, or by placing such moments within the banality of the everyday."

This combination of vulnerability and violence is very evident in the poetry in “Rabbit”, expressed in a stream of first-person narrative often switching suddenly in mid-stream to express emotional confusion and the highs and lows of relationships. The poems deal with gender, sexuality, addiction and sexual exploitation, subjects which are easy to do badly. The poems in this book however are, without exception, extraordinarily powerful. They're the sort of poems you want to read and re-read, to read out loud, to revel in their language, which, with its dynamism and beauty, produces a tension with the often grim subject matter.

It's hard to quote from this poetry in a review, as the poems are often long and their effects are cumulative, but here's one of the shorter poems in full:

all i want is everything
underwater forever rendered
in a scum

The apocalyptic opening is undercut by the image of a string of sausages, though the line "a whole sea of metal and salt" continues the dark tone. The last three lines are psychologically acute, expressing as they do a fear of making things alright, and a longing for the reassurance of the past, which, however bad it may be, is at least familiar. The range of this short poem is remarkable, even more so as it's achieved in the language of plain speech.

Some of the longer poems use repetition to great effect. The sequence “Denial” embodies the obsessive nature of addiction. It repeats the phrase "...is thirsty work" to provide a series of images of everyday life seen through the filter of drink:

There are five pages of this, and the cumulative effect is strangely moving, achieved without any attempt at pathos or self-regard; on the contrary, it involves an unflinching look at what addiction is and at the behaviour of the narrator. This is true throughout the collection, which nevertheless, is not without its moments of joy and uplift, as in:

If the poems veer between, or maybe combine, violence and vulnerability, then the rabbit of the title represents the latter, and is present in some startlingly brutal poems. This isn't graphic violence, but more a presence couched at times in almost childlike language. From the poem "My Baby Life" we have:

This is followed by the poem "Four Ways to Trap a Rabbit" which, again, is difficult to quote from effectively, but which weaves what appear to be fraught childhood memories ("my sister takes me to the wood...") with instructions for trapping a rabbit.

One of the clear influences on Robinson is the New York school, a male-dominated group (albeit gay male) which - at least in the first wave - had little interest in engaging with political or social issues. It's interesting to see how Robinson has adapted their methods to address the oppression of women and minorities, and to accommodate a lesbian and feminist ethos, not by sloganizing or by overt references, but by making the speaking voice of the poems that of the oppressed, as in the poem "The Biggest Loser" ("i'm twenty nine now & / since i was five i have been / sexually assaulted many times"). As Robinson herself has written, "I don't believe in the poet as an isolated or introspective figure, but rather I think that the poet produces her best work when she's engaging in a dialogue with the world around her". But while the poems in this collection engage with the oppressions suffered by the “minority identities” mentioned earlier, as well as those suffered by women at the hands of men, one of the remarkable things about this book is that despite the sadness and darkness of the poems, they are at the same time, moving and uplifting with moments of great beauty and tenderness:

The collection is divided into three sections, and in the third there is a change of tone; the poems are more upbeat and, while the backdrop of anxiety and disturbing imagery remains, there are more moments of joy. This section shows the influence of Frank O'Hara more overtly than the rest of the book - which is not to say it's derivative at all, Robinson's style is too distinctively her own for that – and there’s a moving elegy to O’Hara, “Fucking Up On The Rocks” (“a monument to my favourite alcoholic / the greatest homosexual     who ever lived & died”).

The collection ends with a tour-de-force in the form of the poem "Art in America". This type of poem - trying to figure out, in an elegiac tone, what America is all about - goes back to Ginsberg and earlier, and there are plenty of superb examples; from Alice Notley ("At Nght The States") and Peter Gizzi's elegy for Gregory Corso ("Revival"). But Robinson's poem is all her own, mixing absurdist and surreal elements with poignant expressions of personal longing. The elegy for America is also a poem of unrequited love, and the fact that a white rat born from a plastic egg in a wound in the poet’s arm can be incorporated brilliantly into this piece says it all about what this poet can do.