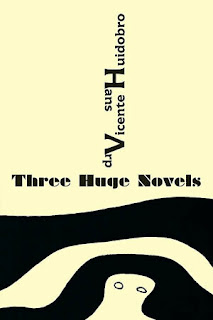 In 1931 Hans Arp and Vincente Huidobro, with their families, holidayed together in Arcachon, south of Bordeaux. While there they collaborated on three prose pieces which Huidobro later tried to have published. The three stories were deemed too insubstantial to make a book, and the publisher suggested Huidobro provide two more, which he did, composing them himself. These five texts, translated by Tony Frazer, make up Three Huge Novels.

In the introduction Frazer describes the stories, especially the jointly composed ones, as ‘almost textbook examples of Surrealism’ and as ‘splendidly silly.’ There’s a fair degree of truth in this, though sharp political and social satire is also evident in the works, making them more than just sources of amusement. Frustrated sexual desire, on the other hand, a theme characteristic of much early Surrealist writing, barely makes an appearance.

The first of the stories, ‘Save your eyes’, best fits Frazer’s description. Much of it is entertainingly nonsensical, and parts of it look like they were written using the ‘exquisite corpse’ method much favoured by the Surrealists. But even this tale includes some pointed social comment. The story is set in a future in which humans have been superseded by hyper-rational ‘hermaphrometallic globules’, a kind of robotic super-race. At one point the globules discover a corpse in a cave which one of them claims is a ‘future unknown soldier’ thwarted in his ambition when humans became extinct and the future war did not take place. The second story again pokes fun at the military, and at various world leaders, crowned heads of state and the Pope.

In the third tale war becomes the central butt of the humour. Arp was from Alsace, and was half French, half German. The changing territorial claims on this region are the backdrop to the story, though the country described is fictional. When the reigning powers are overthrown by their rivals the national pride is wounded and they cannot understand how they could have been defeated.

How rightly our newspapers spoke of the inexplicable mystery of our defeat. Our racial superiority is undeniable. The elegance and beauty of our women are unrivalled anywhere. The keen talent of our men, their esprit, how can it be compared with the nebulous and greasy intelligence of the Mammarists, an impure race with no secular traditions?

Later there is a hilarious description of a funeral procession marking the death of the great Marshall Duval. In honour of this national hero literally everything is named after him so that the national language becomes reduced to the single word duval.

The two stories which Huidobro composed alone have more narrative coherence than the collaborative works, but are otherwise similar in style and content. The first takes place in Oratonia, a nation of orators where three rival groups fight for dominance. Electrical power in the territory is provided by the ‘electric orator’ whose jaw is oiled every three hours and who is fed with delicacies through his anus. He is eventually knifed by an anarchist saboteur. There’s a particularly funny section about the national religion, the cult of the fly, a thinly disguised attack on Catholicism. Having a house full of flies is a blessing.

At family meals, when a dead fly is seen on a plate, two candles are lit at once and the head of the family carefully takes the body of the goddess and places it between the lips of the youngest of his children, because only the innocent is worthy to eat the heavenly delicacy.

Anyone who interferes with flies is summarily executed. The final story tells of a society which becomes increasingly overrun by gangsters until everyone is involved in crime. The national hero is a mobster called John Chicago. The social critique here is again obvious.

The year before Arp and Huidobro engaged in their collaborative project, Bunuel’s film L’Age d’Or, co-written with Dali, had opened in Paris and the cinema had been trashed by an alt-right group protesting against the film’s anti-bourgeois and anti-clerical stance. These were dark days. The narratives composed by Arp and Huidobro were written just a few years before Hitler’s rise to power, the outbreak of the civil war in Spain, and Stalin’s consolidation of power in the USSR. Their black comedy reflects the growing slide towards barbarism in Europe.