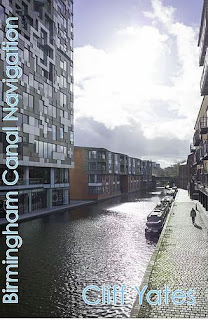 I first encountered the poetry of Cliff Yates when he gave a reading at Wired Café in Nottingham at which I bought his collection “Jam”. It seemed to me that he was a distinctive voice with an recognisable style which is hard to categorise; not “experimental” but clearly influenced by recent modernist writers while, at the same time, funny, conversational, anecdotal and nostalgic. This new collection from KFS is clearly in Yates’s signature style and as the title suggests is a celebration of his native Birmingham.

The poetry in "Birmingham Canal Navigation" deals with day-to-day life in a British city, family and domestic scenes, Sunday afternoon walks and lunch break at the local factory. The poems are funny and the poetic persona behind them is engaging and self-deprecating, and the whole has a slightly absurd, almost surrealist feel; working at the Custard Factory, performing the Tai Chi Sprout Stalk form, reading a sign saying "no lifting / over this building". But these poems are also concerned with the poet’s place in the social fabric of Birmingham, its history, its wars and the loss associated with the passage of time and with social change. Yates has a poem titled "Place", which begins with a walk through parts of Birmingham on which he'll carry "my Dad's bag of tools, wear his beret" and walk through:

Victoria Square, Bath Street, that bend in the canal

The poem has a stillness and a nostalgic air. Towards the end it mentions the painter John Walker, who was associated with Birmingham, and, talking about his work, ends with the lines:

his Dad in Passchendaele, World war I.

Where there aren't any footprints, you make your own.

Walker's father is referred to as "Dad", in a move which personalises these lines, and the impression here is that the places listed earlier in the poem are redolent of past events, often not recorded, so that the poet has to “make his own footprints”. Indeed, there is a sense throughout the book that the poems are recovering an unrecorded past, small-scale and personal, but part of the larger history of Birmingham. In the poem "Spitfires Were Built At Castle Bromwich" there's an account of the speaker's parents meeting ("Mum in the offices,/Dad on a job there,/carpenter and joiner"). The poem draws a precise portrait of the "Dad":

pencil behind his ear -

The poem puts this personal memory in the context of war and industry, but, typically with Yates, it's in the form of an affectionate celebration of the workers, all the more effective for being almost tongue-in-cheek:

Let's hear it for the women

of the engine production line

the lathe, the drill, the milling machine

In post-industrial Birmingham - and in Britain generally - there's a feeling that the era of industrialism, at least that part which forms working-class history, has been erased. These poems are attempts to recover that, and are full of moments of nostalgia and pathos:

Thought I saw you on Corporation Street

yesterday - in your early fifties,

wearing that raincoat, climbing on a bus.

Yates is also concerned with the effects of war – albeit a war of his parents generation - and is trying to retain a sense of belonging to places and events that seem in danger of vanishing; he does this by using humour and by undercutting seriousness. The poems make the reader smile. In a poem to be read "in the voice of a 1980s newsreader", "the last bus to be built / in Coventry" takes the local football team on a victory tour of the city:

Asked for a statement, after

what will most likely be

the bus was reportedly too choked

with emotion to be ale to speak.

This lightness of touch is maintained even while the poem in question has a sub-heading "the impact of the Coventry bombing on the city's infrastructure".

The identification of the poet with his home city is most directly expressed in the poem "Born in Handsworth" in which a kind of reverse-personification sees the poet become the city ("My blowlamp eyes are Soho Road ... my hair is Yardley Wood, my head / Barr Beacon"), an effect which Yates pulls off partly by undercutting the seriousness ("The crick in my neck is..."). Elsewhere the poems exude a warm nostalgia, appealing to those who grew up in the industrial north and midlands; but these are also poems that show more than a slight acquaintance with American poetry and the British alternative tradition. Yates's "Red Sky Lift" begins "It's lunchtime just forty minutes so I take / the stairs" in what is a nod to Frank O'Hara's lunch poems. As with O’Hara, and the Californian poet Philip Whalen, the persona speaking in the poems is likeable; someone you wouldn't mind spending time with, and this makes the poetry easy to read. The conversational mode of the New York School is evident, but Yates also draws on British poetry, with a poem dedicated to Robert Sheppard (appropriately, a series of witty "quotations"), to fellow poet Andrew Taylor and to the memory of Tom Raworth which effectively imitates Raworth's early style. And, of course, Yates's fellow Birmingham poet Roy Fisher is ever-present, with his pared-back style and observations of the urban environment.

One of the things that makes these poems work so well is the attention paid to the details of everyday life; the sounds, smells and happenings of an ordinary day. The poem “Swimming Pool” captures a child’s experience of swimming lessons with his father, a magical, almost hyper-real experience expressed in concrete images:

…the crisps with the tiny blue bag,

salt on my fingers upstairs on the bus,

the lights in the shops, the streetlamps,

Dad's warmth through his overcoat,

the smell of chlorine on the back of my hands.

The poem “Bank Holiday” is a humorous description of an attempt at gardening, collaged with random snatches of conversation and ordinary events, like watching TV series “last night after the Cup Final” in a beguiling mix which raises the daily round into something dreamlike, almost mystical. The last poem in the collection, “Dog” was published in an online magazine as a "lockdown" poem, and it’s one of the best I’ve read in that new genre. The eponymous dog is wandering round the deserted city, observing the cherry blossom and the closed-up shops, and this unlikely conceit is strangely moving. Noting the cherry blossom as “particularly stunning”:

…his heart was lifted

And he decided not to be disappointed.

The easy, relaxed style of these poems, and the amiable persona found in them, make them a pleasure to read, but can also mask the range of concerns, which is wide. The poetry concerns itself with place, history and the recovery of a past in danger of being forgotten. That it does so in poems so seemingly effortless and open to the reader is a measure of the poet's skill.