Review - "Dressing for the Afterlife" by Maria Taylor 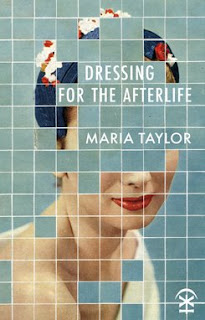 This book opens with a prologue in which the afterlife is defined as "the precise moment / you ended a former existence". The notion of a life as a series of separate "existences" is set out as a major theme. The opening and closing poems both use the image of running as a metaphor for progress through life. In these poems, different identities are delineated as fleeting stages in a person's life. The collection is therefore structured around this theme, but in a way that seems organic rather than contrived.

In terms of the poetics used, there seem to be two forces operating; one is pushing the poetry to be the standard poetry of the British mainstream variety; that is, first-person anecdote and  subjective observation and comment; and another pushing it towards something much more interesting, which is unpredictable, language-driven and exciting. Happily, it's the second of these forces which wins out, although the tension between the two is a fascinating feature of the collection. Taylor's previous collection, "Melanchrini", appeared in 2012, and the long gap between the two has seen a significant development. In "Melanchrini", a poem entitled "Butcher" provides an example of a standard technique; an observation of a man, who, "Pausing the cleaver, tells us how he misses / caper-picking on the hillsides at dawn" . The poem describes the rabbits hung up for sale in the shop, and finishes on a note typical of the type of poetry mentioned above, an observation implying something about the person or the scene described:

his board furrowed with trails of blood.

The verb furrowed is perfect here, and the whole poem is skilfully done, but nothing marks it out from many other similar contemporary poems. But there are other poems in "Melanchrini" which point towards this new collection, often ones which reference classical mythology, as if this liberated the poet from the everyday. In the poem "Asphodel, Revisited" there is a merging of mythology and realism:

So, after a bit of spaced-out skinny-dipping in the Lethe,

we headed off for a smoke; heads light and stupid,

emerging from the water worse than an unmemoried babe.

These are the opening lines, and the poem continues this melange of colloquial ("headed off for a smoke") and  literary language ("unmemoried babe") presenting a disorienting and entertaining mix. This poem, and others like it in Taylor's first collection, point forward to the achievement of "Dressing for the Afterlife", the opening poem of which provides a striking example. The opening line could be from any number of mainstream poems:

I took up running when I turned forty

But within a few lines it's apparent that this poem is something different, and unexpected; a conceit of running through life with a speeded-up chronology, passing scenes which, while they seem to be part of the speakers's life, are dissociated from her by the way in which they're presented. The poem finishes with some poignant lines:

I couldn't get as far as I wanted.

The lights changed. My ribs, my flaming heart

and my tired, tired body burned.

The pathos is enhanced by the repetition of "tired" in the last line, turning the poem into more than just a clever conceit, making it seem unfinished and providing a hint of the tiredness of woman and mother; a theme taken up in the rest of the book.

Two poems early in the collection provide something which, while hinted at in the earlier book, go beyond what is attempted there in terms of linguistic adventurousness. The first-person pronoun is absent from them. In "Moon in Gemini" pairs of phrases provide a counterpoint by contradicting each other:

This poem reflects contradictory aspects of a personality and of experience - one of the themes of the book - including the split induced by cross-cultural connections relating to the poet's Cypriot roots. The second poem, "Everything is a fight between winter and spring", lacking any punctuation, uses musical language to build up phrases one on another, ending with lines which work because the ground has been laid for them by focussing on language rather than a poetic persona

and the earth will have its rot and bright colour

These two poems would have been out of place in Taylor's previous collection, but the                   movement towards a more language-based idiom which they represent is also evident in the more conventional poems in "Dressing for the Afterlife". In the poem "Songbird" we have the opening line:

She flew in with a stolen heart. She had a vacant nest

Which appear fairly conventional. But the poem continuous with the pronoun 'she', describing "a girl trapped in lime", and it becomes apparent that 'she' is the speaker of the poem, leading to the poignant final lines:

You can't release that bird anywhere -

there's no country on any map for her to return.

If we compare this to the poem "The Butcher" (discussed above) it's clear that it has considerably more depth and complexity beneath the apparently simple surface. The final line quoted above points to an important theme of this collection, the experience of a person from immigrant stock trying to establish her identity and investigating, from the standpoint of a British-raised woman, her relations with her family in Cyprus. There are poems about her Cypriot grandparents, such as "Yiayia's House" ("Nothing more than two rooms/painted white", and the feeling of an immigrant child as being different, such as "The Ferry" ("Vow to get further than any of them./Be different."). The poem "Christening" is a fine, understated example of the way the poet expresses the experience of the blurring of identity at certain points in life:

Mother is a swimming pool of voices

The word 'mother' has a way of effacing a woman's identity or tying it to a specific role. The speaker "stares through mothers reflected / in training pool windows: flickering, immutable". The image of a christening which ends the poem is expressed in these lines:

You wait for a child.

Your name rises from water.

The implication is that the speaker is waiting to become a mother in the way that many young women do, to affirm her identity, which emerges as the child does from the christening water. There's no mention of Cypriot identity, but it's implied in the religious significance of the ritual. The slight blurring of chronology in "Christening" is a feature of the collection, and in the poem "Ante", the speaker, on holiday as part of a couple, looks forward to the arrival of children, almost as if in premonition. The children appear in the poem as hallucinatory presences.

We have adventurous poems like "Hypothetical", a surreal anecdote featuring Daniel Craig, and "The Horse", which, along with "Choose Your Own Adventure", is the most experimental poem in the collection ("Horse is my editor. Horse is Dustin Hoffman"). "Choose your own adventure" is a witty and entertaining poem structured like a board game.

At this point I need to mention that there are two poems in this book which, regardless of "themes" (which they do fit into), show the poet delighting in language and submitting to its glamour to create glittering linguistic structures. The poem "I Began the Twenty-Twenties As A Silent Film Goddess" has some gorgeous lines:

I dined on prosperity sandwiches and sidecars,

leaving restaurants with a sugar-rimmed mouth

The second poem, "And there she was in the shrunken apartment like Joan Crawford, toy dog on her lap" is an exhilarating ride through mid-twentieth century movie imagery and film-star chic:

...there's armour in glamour - a mirror's feisty glare of brow and lips -

"Dressing for the Afterlife" is an impressive achievement in which the poet's move towards a language-driven poetics bears fruit in apparently simple poems about immediate experience which are woven effectively with more adventurous poetic structures. The combination of these two delineates the major themes of the collection, including identity, the immigrant experience and the different planes of perception encountered in this life and the "afterlife" (which might mean the multiple personae adopted in response to societal pressures) of a woman, immigrant, wife and mother.