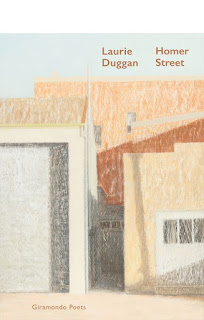 The third section of Laurie Duggan’s new collection of poems is titled ‘Afterimages’, an appropriate title which casts a glance over the shoulder at moments gone. The section engages with a wide range of paintings and painters, from Tintoretto to Tony Tuckson and the first of these short poems is a two-line comment on the Norfolk painter Michael Andrews. I think that istrikes a very pertinent note in these times of semi-virtual reality:

What if all the people you think you know

were just spots of light on canvas?

The image brings to mind a tiny moment in one of the Samuel Beckett German Diaries that are due to be published by Suthkamp Verlag and Faber next year. Writing about his day trip from Berlin to Potsdam in January 1937 Beckett notes ‘Suddenly with mist fallingly wonderful red light like an extension of the leaves that a group of women are raking together, against the grey néant of the Jungfernsee.’ That sense of a future which seems to extend outwards from a moment is something that Laurie Duggan captures with poignant accuracy and it was no surprise that he should have called his earlier collection of poems from 2014 Allotments (Shearsman Books) referring not only to a piece of land, a portion of reality allotted to a person, but also to a sense of what is in effect the personal ‘lot’ of an individual, their destiny which takes its meaning from an accumulation of moments. A new section of allotments appear in Homer Street and number 101, with its slightly menacing echo of George Orwell, brings into focus a moment noticed doubtless from the bar of The Norfolk Arms in London’s Leigh Street, a pausing-place on the way to a Shearsman poetry reading in Swedenborg Hall:

a window
re-hung
on Leigh Street
sunlight and heat
up on the rooftops
shade, a slight
movement of air

There is a visual quality to these lines which brings to mind a slightly menacing hint that could well belong to a painting by Edward Hopper but they also bring to mind another moment of Samuel Beckett which was used by Matthew Scott earlier this year in his Preface to The London Magazine’s extraordinarily powerful collection of writings arising out of the Covid 19 lock-down, Untitled, 2020:

a mind like the one I always had, always on the alert against itself.

As Scott pointed out the word ‘alert’ places the importance of what will follow in a very particular time-frame:

To be alert to complacencies of thought is surely a good thing but Beckett’s phrase also seems to imply a mind at work against its own well-being.

Time and again throughout these poems Laurie Duggan is alert to complacencies and his careful and often wry questions bring moments into focus which might otherwise pass unnoticed. A poem written after looking at Gustave Courbet’s 1854 painting ‘The Meeting, or Bonjour, Monsieur Courbet’, in which the brilliance of the light and the sociability of the moment combine to offer a stillness flexed with movement, concludes with the question

What made him present himself, greeted on the road
by another figure (engaged perhaps
in mere commerce) offer instead of an epithet
a commonplace?

The painting is possibly an account of a meeting between the artist and his patron from Montpellier. Courbet holds himself upright and tilts his head backwards to gaze seriously at Alfred Bruyas, gentleman patron of the Arts who stands statuesque with his servant, head slightly bowed, one step behind him. The artist has a sense of being the wanderer with his staff in his right hand and he presents himself as certainly fully equal to the man of money and position. The commonplace, ‘bonjour’, sets the tone of equality and it suggests a very convincing picture of the poet himself as he looks carefully at what he meets in his travels. As Duggan puts it in ‘Blue Hills 108’

the most fragile things

Three years ago Shearsman Books published Duggan’s ‘no particular place to go’ and this new collection of poems from the Australian Giramondo Publishing Company continues that sauntering journey with its echo of Walden, H.D. Thoreau’s accumulation of rare moments and acute observations:

Let us settle ourselves, and work and wedge our feet downward through the mud and slush of opinion, and prejudice, and tradition, and delusion, and appearance…till we come to a hard bottom and rocks in place, which we can call reality.

Laurie Duggan’s journey took him back to Australia to the ‘salt-pans and marshes / once the Murray drops from its source’:

I travelled down there
thirty years ago, on backroads
in a rented car
spent two days
at the pub in Jingellic
is it still there?