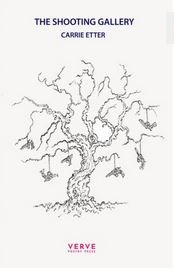 The trouble with Carrie Etter’s latest collection of prose poems it that, on a surface level, it is deceptively easy to read. There are no convoluted sentences or difficult words, nothing to figure out about syntax or meaning. What makes you stop and read again is the subject matter: the first 12 are descriptions of the surreal anti-war drawing of the Czech artist Toyen. The second dozen concerns school shootings in America since Columbine.

The strange line drawings of Toyen are partly based on a children’s game, and of course the shooting ranges where people can practice firing at targets. The drawings include the head of a rabbit, the head of a screaming woman and the wings of dismembered birds. Drawn during the 2nd World War, they are potent dream symbols of the horrors of conflict. Etter’s poems are partly descriptive of the pictures, but they also suggest the lost possibilities and lives distorted and destroyed by war.

The two sentences of The Shooting Gallery IX show this more directly than most:

“The geese are shot and plucked, ready for roasting, but their theatre is crisscrossed by barbed wire. You will be sated, but first you will bleed.”

What do the geese represent? Bodies, or food, which in war is becoming increasingly difficult to find? The barbed wire represents war, of course, but also restriction, forbidden desires, pain, a host of negative experiences.

The second half concerns school shootings in America, and again we read sentences of simple description that describe horror, combined with more surreal images such as the floating differential equations of University of Texas at Austin, 2010.

The phrase “where I come from” ends the poem about a shooting in a school in Normal, Illinois could almost be an epigram to the whole collection. Etter lived in that town with her own family for the first 19 years of her life, and frequently returns there; but the same dispassionate voice speaks in this poem as in all the others. She is as involved in the lives and deaths of all the other schoolchildren and students in all the other poems. The calm, measured phrases of the poem are devastatingly moving:

“At first what rattled / was the proximity, the intimacy- / gunfire only a mile from / my family home. For days I wore the knowledge / like chain mail…”

The forward slashes here (and nowhere else in the collection) give the effect of sharp intakes of breath, of someone trying to control their emotions; or even maybe of gunshots breaking up the phrases.

“Where I come from” is a place where it seems almost everyday for a school to be shot up, for there to be constant war seemingly all over the world, for violence and violent desires to be under the surface of our every rational thought. The restraint of these poems is stretched almost to breaking point, as if at the point of screaming.

This is a serious and sombre book, which leaves the reader with much to ponder, and its surface simplicity does not belie its depth of feeling and thought. It’s a beautiful collection.