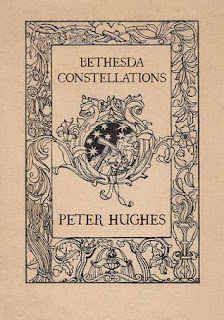 I love Peter Hughes’ poetry which fuses the personal with the political with an ongoing relish for language which so often brings a smile to my face. These poems are mostly geographically located in Wales, his new home I believe and combine a love of place with a love of words in a conversational tone (an inner conversation, that is) which reminds me more than ever of the late John James. In fact Hughes has included another ‘in memoriam’ poem ‘At Red Wharf Bay’ which features the moving lines: ‘I remember all the stories / about contacting the dead /good afternoon to you too John / wherever you may be.’

In ‘Georgic’ (for George Economou) Hughes plays with his knowledge of form – ‘it’s been a long time since the Georgics / George but of course it’s always next season’s  / away fixtures sneaking through the sentence / that occupy the fleeting sunlit glimpses / disappearing at the far end of the mind’s garden centre as someone said in Rome…  .’ There’s an easy going lyrical beauty to this writing which is so filled with humour and is pleasure-driven in a way which puts all the nasty politics in its place. This gets even better with the later line – ‘tapping my foot to your Nashvillanelle’ (tipping my cap to a villanelle, perhaps? – the poem has nineteen lines) which so easily crosses cultural boundaries and puns in a way which is slightly reminiscent of Denise Riley (‘Joseph Cotton Reel’ for example). This almost deserves the description ‘slapstick’ but it’s all so light and breezy, filled with life and variety and such a pleasure to read and it all slips down so easily.

The poems ‘March, ‘April’ and ‘May’, according to the end notes, relate to a series of poems in collaboration with Elena Rivera, based around their joint response to Tchaikovsky. Each of these short poems is formally different and look so on the page in a manner which emphasises the visual aspect of the text without being remotely ‘concrete.’ Here’s ‘April’ in full:

so everybody’s backing up

die behind a skip

or dance in front of thousands

The group titles suggest this may be a sort of ‘diary form’ written under the duress of ‘lockdown’ and all the other disasters besetting us just now. The opening reference to ‘burying their cheeses,’ reminded me, rightly or wrongly, of Pepys’ cheese-burying tactic during the Fire of London, a suggestion which is heightened by the reference to ‘fire’ in the previous poem. There is a suggestion of political oppression (again from the previous poem – ‘the king is in his armoured counting house’) and the overall mix of a taut lyricism with the resisting euphoria of music and a hint towards the title (‘Bethesda Constellations’) with ‘Hubble ultra deep field images’ from ‘May,’ provide a richness which you can work away at and savour at the same time.

There’s plenty more to engage with in this short and enticing collection, including some unexpected references to British motorbikes in ‘Pascoli in Gwynedd’ and numerous mentions of food which substantiate Hughes’ relish for the good things, another ‘John James trope,’ an opposition to all the bad stuff and the bad politics which we are currently living through. Fantastic!