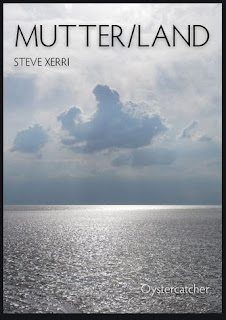 The title poem comes with a quotation from Hugh MacDiarmid – ‘It requires great love of it deeply to read the configuration of a land.” The play on the word ‘mutter’ (German for Mother) and the muttering you might overhear in a pub, for example, suggest both a deep engagement with landscape and with politics yet both these aspects are incorporated into these poems in a manner which is often indirect and convincing. This is writing which is beautifully lyrical yet Zerri’s thought-processes are analytical and critical in a manner which adds depth to the work:

I have heard talk in pubs, English ale

Frog, Dago, Kraut, Eyetie and the rest spill out

turn on me, a half-outlander, and what then

the defence against having this particular

blended crimson running in my veins?

I have been driven to an edge: to this

looking out over a sea the colour of zinc

with the chalk wall at my back, end of a land

whose store of tales is my story-hoard,

its way of speaking mine. ….

There’s a yearning nostalgia in these poems, or rather, as I’m using the word advisedly, a longing for something better, different, an engagement with the world which isn’t entirely dependent on modern technology and the increasingly hollow claims of the advertising industry, the broken façade of a late capitalism which we’re all hopelessly addicted to:

At this point you’ve pretty much had it

with the new world’s always-on-buzz,

its parroting ads & the tinselly clutter

of informatics: the soaring Christ’s-eye

the asking price of a sky-high drone

zoomed up and digitising what voice-

There’s certainly a sense of elegy, almost a requiem, here and I’m imagining that this sequence has been written recently, under the dual facts of the covid virus and the ongoing disaster of Brexit. Certainly these feel like a backdrop to the writing but there’s also an engagement with the landscape that goes deeper and has a much sharper penetration which is of the here and now but also connects us to something more ancient and enduring. I’m in danger of going over the top here I know and romanticising the situation but Xerri’s poetry has a strong material base in its imaginings and lyrical beauty, a relationship between language and place which is exploratory and necessarily complex:

south-west edge of the common

I come to where the culvert

opens its gullet into the stream –

doing their usual on the sloping banks,

protruding from the muddy bed

where the past is being washed away

in clouds by the flow or it may be

the future laid down skin

by filmy skin in a chronology

There’s a sense of the immersive here which reminds me slightly of the psycho-geographical work of Phil Smith and Helen Billinghurst where chance encounters and ‘walking without intent’ become key procedures in an exploratory alternative to received notions of ‘the land.’

In  his ultimate poem ‘The Watchers are Leaving’, Xerri images a post-consumer world, partly dystopian but (hopefully) prefacing something better in which we get these final lines:

When the watchers have gone, there’ll be no-one to write

an end to the flattering narrative of loss heaped on loss,

calligraphy on underpass walls, or in sedate lettering carved

on monuments, once architecture drowns and the waters

work chiselled marble back to pebble-smooth. Every human

mark on the land will be no more than unreadable spraint,

our script reduced to strings of symbols on fragments

of print while in burned-out cellars millions of screens

without electricity will gleam the gleam of sightless eyes.

There’s a certain ‘J.G. Ballard pessimism’ here (minus the exotic landscapes) which feels very much related to our current situation and potential future prospects but there’s a sobering beauty to this writing which perhaps includes a glimmer of hope, of celebration even.

Oystercatcher chapbooks are beautifully produced, each appears to be individually designed and the covers and body text always indicate serious consideration. Steve Xerri, a designer and potter as well as poet, has produced a wonderful cover for his book, a seascape with cloud formation and the sun breaking through, a high definition photograph with simple yet well-balanced typography. It’s an image which has direct relevance to the poetry in its exploration of the issues around landscape and politics.