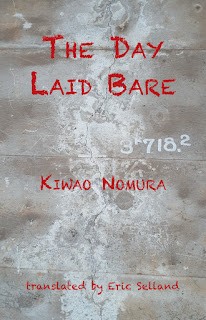 “The Day Laid Bare” by Kiwao Nomura, translated by Eric Selland. Pub. Isobar Press, 82pp.
Kiwao Nomura is a poet of international stature, and The Day Laid Bare is a compelling example of his work. The inventiveness, the wide range of registers, and the diverse traditions brought together in the poetry make it hard to put down. I read the volume at one sitting.

The book consists of alternating and contrasting sections headed ‘Parade’ and ‘Roadblock’. The former represent the contemporary world, the endless procession of human life. The latter embody moments of revolt, barricades thrown up against the ‘Parade’, perhaps offering an alternative.

The texts of the ‘Parade’ sections catalogue a sequence of elusive, enervated life-forms which the poet calls ‘Flesh’. These poems are largely in prose.

TWENTIETH FLESH is sleepy, always sleepy. Hence it makes one feel there is some kind of depth or intelligence there, but of course there’s not even a speck.

TWENTY-FIRST FLESH flies. If it did not it would be in danger of being devoured by the fervid boundary of its own shadow.

Eric Selland, Nomura’s translator, suggests that ‘Flesh’ has associations with the phenomenology of Merleau-Ponty. The French philosopher used the term to describe our perceptual entanglement in the world. Nomura is presumably employing the concept parodically. The various manifestations of ‘Flesh’ seem like close cousins of the protean and ectoplasmic Meisodems of the Belgian poet Henri Michaux, distressingly devoid of substance, their insufficiency ‘laid bare’.

At the end of the Parade the ‘Flesh’ (plural), very like Michaux’s Meisodems, finally seems to escape their oppressive condition. Nomura writes: ‘ONE HUNDRED FLESH at long last, flapping its wings, becomes a disembodied spirit.’ ‘It is a good sign’ he says. ‘Go, follow – give chase.’

French poetry and philosophy, Selland tells us in his introduction, have had a major influence on modern Japanese poetry. Nomura has translated the complete poems of René Char into Japanese, and wrote a book analysing Rimbaud’s work using concepts derived from Gilles Deleuze. There’s a clear suggestion of the Rimbaud of Illuminations in some of the ‘Roadblock’ poems.

The ‘Roadblock’ sections offer points of reflection and resistance, some exploring the possibilities of escape. ‘Roadblock 4 (I am the threshold)’ includes the lines:

One threshold overlaps another

When held, there are any number of places you can rest

All along the furrows of your spine

‘Roadblock 5 (The Zone)’ presents a nightmarish struggle with birth and death. The original Japanese text of The Day Laid Bare appeared in 2011, the year of the Tōhoku earthquake and resulting Fukushima nuclear disaster. The frequently mentioned ‘zone’ of this poem suggests the exclusion area around the reactor site, the text expressive of the writer’s horror at the implications of the accident.

‘Roadblock 12 (Cockscomb, Cockscomb)’, the last in the sequence, returns to the dancing figure of ‘Roadblock 4’ and to Merleau-Ponty’s concept of ‘flesh’. ‘Empty, vain yet beautiful this flesh, its final breath,’ Nomura writes. The poem ends:

Selland provides six pages of informative notes at the end of the book, offering insights into the subtleties of Nomura’s work, and the challenges involved in translating it. The mix of absurdist humour, ecstatic play, and questioning mistrust comes across well in the English versions. These are complex poems, the texts pushing, as Nomura says in ‘Roadblock 1’ ‘as far as that of which we cannot speak.’ The Day Laid Bare is the first complete volume of Nomura’s poetry to be translated into English.