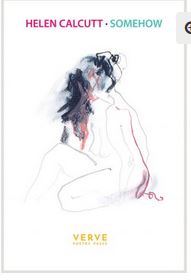 There are so many poets whose work is out there and published now that it’s not possible to keep abreast, something which Andrew Duncan has also commented on in his recent critical writings. Helen Calcutt is new to me and the powerful work in this chapbook resounds with both technique and emotional directness in a manner which feels confrontational in all the senses of the word. Writing about extreme subjects – in this case the suicide of her brother Matthew at the age of 40 – can be very challenging and the relationship here between art and therapy can be a tricky subject to broach. Nevertheless I think this is an astonishing book which deserves to be widely read and discussed.

In ‘Something terrible happened’, an early poem in the collection, we have the opening lines:

and when I answered

yourself, and that was the start

of you being dead.

Wow! – such an encapsulation and one that prefaces what follows: a welter of emotional conflicts, clear thinking, startling, sometimes shocking imagery, confusion and a powerful reflection on a subject which probably remains under-discussed.

From ‘A conversation with my daughter about my brother’s suicide’ (what a title!) we get the following:

The moon is bright and the clouds have parted.

The trees are painted trees, living a still life.

She tells me my brother is the moon.

I’ve bathed her, given her milk

and as I fold the sheets from her knees

she asks me how he died.

He was very sad, I say

and she seems to understand.

The metaphor of ‘a still life’ is followed through in this poem which is very painterly and gently lyrical in a manner which feels both melancholic yet somehow accepting and in a positive sense also analytical. This sounds like an odd mash of thought and feeling but it’s how I responded to the piece on first and then a subsequent reading. It finishes thus:

Then we talk about the moon being

the shape of an egg, upside down.

and agree – we want to see everything.

In ‘Waving, or drowning? (after Stevie Smith)’ the ‘flower imagery’ in the opening stanza is strangely disturbing in its psychological impact – ‘When he came alive, you leant in, / a red flower to his whisper. / What he said, was darkness / from the bud of the spine, so you turned away.’ The ‘rewiring’ of the famous Smith poem with its mixing of imagery (‘embryonic sack, opening and closing’; ‘Nothing like the confusion / of water to make you think / something’s alive.’) is unsettling in its confused introspection and not easy to confront. By contrast the poem ‘Found – words taken from coroner’s post-mortem report, October 2017’ – has a descriptive directness which is equally chilling as is clear from the following extracts:

She found him in the dark at the bottom

of the stairs. Body of a male, hanging

Impression is of someone

The awful irony of the penultimate stanza and the implied dismissal of the last which are related of course to the nature of the prescribed language in this case are again not easy to confront if for different reasons.

As well as an abiding influence of ‘the visual’ in this group of poems there is the additional element of sound, as exemplified in ‘City Birds’ where we get the following:

It grows with the emptiness of streets,

they are lamps muted, blind yet listening,

and even that woman in the park

the needle of their throats.

There’s a sense of desperation here, of nature out of key, the sexual imagery demanding in its joyful desire and a need for fulfilled exhaustion. This feels like turmoil but the expression is clear and stark.

There are fifteen poems in this short collection and I won’t say that I found it an enjoyable read – how could I? – but I’m glad that I encountered this book which is filled with emotional insight and heightened awareness for all its dark matter. The final poem ‘The Blossom Tree’ seems to contain elements of both a Christian and a Pantheistic ‘world view’ without in any way coming across as didactic or overbearing.