“The Taxidermist” by Shazea Quraishi 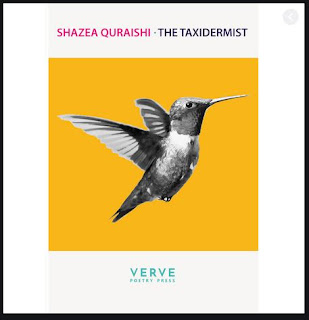 Of the three chapbooks by Verve I’ve recently received to review I found this to be the most interesting. Quraishi’s use of language is taut and playful throughout and while there is a serious aspect to this writing – taxidermy as a metaphor for death or ‘the dead’, let’s say – there is a contemplation on the nature of art which is filled with pleasure and with display in the best possible sense of the word. There is, apparently, a use of the anagram technique inspired by the Oulipo movement here and while this is not obvious at a first reading the wordplay and ‘sound aspect’ of the material is abundant and enriches the nature of these poems no end.

There is a concern with the visual nature of the poem on the page which includes a shift in typeface when deemed necessary, as in the following, for example:

no song  no humming

I love the way that you can savour the sound aspect of these poems even as you read them through to yourself: ‘Time has expanded or shrunk  the days merging / Word spreads / her freezer begins to fill,’ from ‘Day’, for example. There’s a balance of texture and narrative and something approaching abstraction here which combines an interest in the natural world (and collecting!) with an ecological angle which is filled with the sensuous and the informative. Ideas and details are easily integrated into the whole text and this is poetry which works effectively on a variety of levels. In ‘Scott’s Oriole’

we get the following:

This is prefaced by a descriptive page detailing the life cycle of the Greenland shark, a creature which, as far as is known is capable of living for hundreds of years and has been recorded to grow to a length of 24 feet. ‘As Shakespeare wrote a Greenland shark still / alive today swam untroubled through the waters of the / northern seas.’ If there’s a hinting towards the early work of Damian Hirst here in terms of a pondering upon the notions of our mortality then it’s a beautifully constructed sequence of poems and texts which interrelate in a very breezy, good-tempered manner and which inspire the reader to absorb, to think and to enjoy.

I’d not come across Shazea Quraishi’s poetry before encountering this chapbook but I’ll certainly be looking out for her work in the future. Another new name to conjure with.