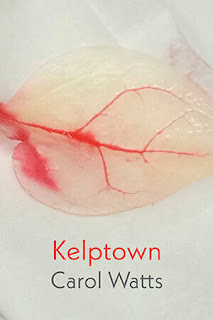 From her position of being both destitute and homeless Jane Eyre looked over the moorlands near Morton and her eye ‘feasted on the outline of swell and sweep’. It was thinking recently about this line from Charlotte Brontë that made me realise how important a poem has been written by Carol Watts. The six stanzas of ‘Kelptown’ set out the stall for what is, to my mind, one of the most sophisticated and powerful poems to have been published for some considerable time:

Slippery condominium, finding a foothold perilous
to a resting here, each green cell an inhabiting,
each morning a remaking of us.

How do I live, tenant amongst your long fronds.
Gathering the means to remain, my glutinous
high rise swaying, extending northward.

From the mid-fourteenth century a ‘tenant’ has held lands by title or by lease taking the name from the Old French tenir, to hold, and the Latin tenere, to keep. Tenant is a word which found place initially in Langland’s Piers Plowman before making a haunting appearance as the central conclusion to the thoughts of an old man in T.S. Eliot’s ‘Gerontion’ where considerations about the ‘cunning passages’ of history and the relationship of the individual to the world around him become ‘Tenants of the house, / Thoughts of a dry brain in a dry season.’

On the back cover of this new Shearsman collection by Carol Watts there is a comment by David Herd which points directly to one of the most important aspects of these poems:

This is poetry at the edge of the land, but also at the edge of our horizon. Kelptown is Kemptown, so we are on the south coast of England. But this is not a poetry in which borders are fixed. What we are given instead is a language of continuities, lines of contact and connection that conventional place-making keeps from view. We are standing at the shore, knowing that the waters are rising, but knowing also that our only hope is to situate ourselves in a radically different way.

The joint control of landscape in this ‘slippery condominium’ requires responsibility and determination and the notes at the end of this slim volume tell us of the marine rewilding initiative, Help Our Kelp, on the south coast of England which seeks to keep trawling away from the coastline to allow forests of seaweed to regenerate. That tenancy invites responsibility was one of the initial thoughts in Tennyson’s early poem ‘The Deserted House’:

Life and Thought have gone away
Side by side,
Leaving door and windows wide:
Careless tenants they!

In Watts’s new poem the poet stands Gerontion-like ‘renting vegetal architecture’ and building a home ‘on friable shores, built from inundate truths.’ As if in echo of another Victorian poet’s determined stance on cliffs at Dover we are compelled to stare at what darkening swells and sweeps lie before us:

Made and remade, no stone to grip without rolling,
depositional and uncertain, no holdfast place,
yet we live here, and daily discover this.

It is David Herd who alerts us to the world of Thoreau’s Walden and he was perhaps thinking of the moment when the author, ‘having had a surfeit of human society and gossip’ turns to the ponds and ‘had made my home by the shore.’

‘Kelptown’ is both a poem which concerns itself with enormous evolutionary issues and at the same time offers us an individual awareness of what it is to be fully human. In the six sections of this remarkable sequence you wake one day to find yourselfWe are compelled to recognise the fragility of our tenancy as a Marvellian ‘Precipice’ and our ‘high rise’ sways in the world of ‘cellular traversal’.