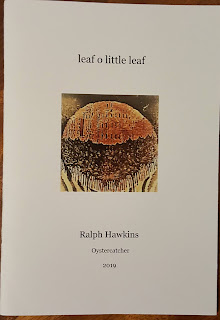 Ralph Hawkins has devoted his life to the art of poetry and has influenced many contemporary poets through his tenure at Essex University in the 1970s and by his subsequent poetic practice. His three collections from Shearsman Books, as well as his earlier small press output, is a hugely impressive body of work, if that phrase isn't too grandiloquent for such light and airy poetry. Yet he has a low profile in the larger poetry world.

I can't imagine any reader who wouldn't be delighted by the playfulness and exuberance of the work in this short selection from Oystercatcher:

impossible to put into words
the size of his golden baubles

The poetry is witty and full of humour, seeming at first glance to take nothing seriously:

This is from the poem "Transformations #2", but in the third "transformation" the subject of the future of humanity on planet earth crops up, handled in typical Hawkins style:

eggs can transform into chickens
but nothing can transform a stone into a chicken
a cold dead stone upon the living stone of the blue earth
its sky, its sea, its fish and its chickens

The beauty and pathos of this is all the more powerful in its context of playful and exuberant language. The title of the collection, "leaf o little leafe", nicely expresses the feeling of fragility these texts have. The poems seem scattered across the page, often in what appear to be disconnected fragments which, for all their unpredictability and sudden switches, somehow cohere into meangingful wholes. Or meaningful fragments. The poems seem artless, and I can imagine a younger poet - or any poet - wondering how they could manage to write like this. For all their light and airy nature, the poems are wide in scope and can tackle the biggest subjects. The two poems for Max Jacob paint a portrait in concise language, without wasting a word:

The poem to Jacob is in two parts, and, given his ultimate fate in the Holocaust, which is referred to in the poems, is intensely moving. Similarly, the poem to the painter Millet, which seem like a verbal equivalent of his paintings, conveys the feeling of rural toil that Millet portrayed, but in a way that always foregrounds language:

leading to the poignant ending:

Notice "exhaustive" rather than "exhausting", a subtle touch which shifts the emphasis slightly to encompass both the labour portrayed and the painters technique. Kelvin Corcoran wrote to me recently about Hawkins' work, saying that "he inherits something from the whole British Poetry Revival" - the revival, that is, of twentieth century modernism in British poetry which took place in the 1970s. Corcoran pointed out a phrase from this collection which "pins something still opening out in Ralph's work". The phrase is used by Hawkins about Max Jacob:

It's clear - though not at first glance - that this is very literary poetry. It seems to me that Hawkins has reached a point in his life and career, after decades of immersion in the practice, that the poetry happens naturally. What at first seems naive playfulness is the result of a lifetime devoted to the art which allows Hawkins to draw on surrealist and modernist strands in a way that seems effortless.