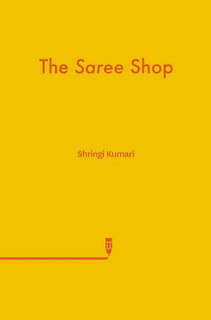 Shringi Kumari is an Indian poet currently resident in the UK. This collection is dedicated to the poet's mother, and celebrates the women of South Asia, investigates their place in a patriarchal society and addresses the relationship between different generations of women. The focus is on gender politics as well as post-colonialism and the experience of a young Indian woman in a westernised society. But the poems are in no way programmatic or formulaic. On the contrary, the writer never forgets that she is writing poetry, that is, the beauty and ambiguity of language is foregrounded, along with sense that its rhythm is a physical thing associated with speech and with the body. The poems don't provide easy answers, and a number of them are strange and unsettling.

The central section of the book contains the title poem, "The Saree Shop". Where we might expect anecdotes about the colourful scenes in such a shop we get a picture of a lone woman in a saree, sitting on the floor in what seems to be a meditative trance, contemplating "a magic man, who tore her very saree, wrapped her in leaves instead". At the end of the poem, the woman lies down to sleep with the saree covering her face:

with the yellow stripes flowing off the cloth

Becoming streams of forbidden ideas
Becoming roots under her feet
Twisting into flowers to be left in the air as balloons
Twisting into a long braid, leading to a place

So the saree is a symbol of freedom, of women's autonomy and of mystery, which is the role it plays throughout the poems in this collection. The poems range from realism - one poem is a transcript of a phone conversation between two female lovers caught by the mother of one of them - to the impressionistic. An example of the the latter style is a poem called {Virile}:

What made man endless?

A slug or a scorpion hanging from a glacier of flesh.
That is man - virile, potent. Absent. Absolute.

The poem then recounts a merger between male and female, as if the latter is probing and investigating masculinity from inside:

The woman in my man is clever, astute. She knows exactly when

to grow a moustache and
when to let hairy nipples rest behind clothes.

The shape-shifting and surreal imagery in this poem is typical of the richness of the language found in this collection. But the language is never cluttered and can achieve the simplicity of direct statement when needed. By contrast with {Virile}, there is the poem "Sunny Afternoon Shop", a straightforward description of "that corner shop" where "they sold soft-hued afternoons / for nothing":

Within this homely description it becomes apparent that the shop is run by men - "brothers" - and that there are three religions and three languages spoken, Partition is discussed and that when "a woman was brought, limbs broken / At that shop, they hid her / instead of asking what happened". This last phrase is ambiguous: was the hiding an act of kindness, or a way of hiding the shame the woman brought? At the end of the poem we hear how the children of the household were "divided by gender", boys and girls spending their evening separately.

This collection also addresses post-colonial politics, and there is poem titled "Salt is Born" which, we are told, is "inspired by the Dandi Salt March, a 24-day march to Dandi as nonviolent protest against the British salt monopoly”. This poem, while speaking out about British actions, also contains a critique of the Indian response to colonialism: “Dear Ghandi - non-violence is a protest of the lazy past".

Poetry with a "message" needs to be multi-dimensional enough, not to transcend the message (which in this case is important in itself), but to bring the reader back to the poetry to engage in real-time with the ideas involved. The language in this book will certainly do that, with its ability to build compelling structures from language which is alive and breathing. In the rare case where the poem doesn't quite work for me - as in the poem "One Bird, Many Birds", which for me falls a little flat on the page (though I'm certainly missing some cultural references) - the language is never less than interesting, and in most cases is compelling. The poem "My Chubby Hands", for example, which paints a portrait of a strange being, perhaps a small child, perhaps symbolising the poet, uses the language of surrealism:

Later in the collection we have the poem "Clay Flower and Sky Animals", which is a mixture of prose and verse, which, in the form of what appears to be a love-letter, recounts the genesis of a poem, and contains a poem-within-a-poem. After the internal poem, we have:

Is it complete? - you ask. The night dissolves in itself. Animal constellations          land on our table, the rose spreads as generous red silk. The two of  us      consume all the poetry we could ever eat.

Adventurous use of language like this achieves real beauty and makes this collection one which this reader at least will return to, especially as it is allied to insights into Indian society and the role of women within it.