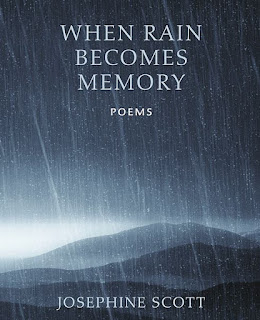 These are poems fuelled by memory and by description, the latter often vivid and colourful in detail but also straightforward and at first glance seemingly ‘prosaic’, that is until you become immersed in the world of the teller – and I take these poems to be largely autobiographical – where they become intriguing, full of interesting suggestion and partial narratives where you have to do a fair bit of the work for yourself, which is, of course, how it should be.

Travel is an important aspect of this collection, a recalled childhood in Australia, fleeting images of other places, warm and exotic, sensual explorations which contrast with the English climate, whether in London or in Scott’s native Northumberland. Amid the projections of landscape, which are central to her style, we have shifts between time and place, a failing relationship, a betrayal of sorts, a mixing of experience relating to both youth and to a more mature outlook. There is bitterness at times, a reflection on failing health and a combination of domestic detail and a more freewheeling expansive exploration of the world which, on re-reading pushes the material into a different place. This is poetry which is both quietly introspective and yet demanding in its insistence to be read. There’s a constant sense of movement, of shifting space, which is usually accompanied by sharply evoked cameos of particular times and places and the interaction between the two is at the heart of this collection of poems.

Sky was fading to burnt umber
when I heard their distinctive call,
an arrow of swans flying south.

Tide was falling, leaving pools scuttled
with creatures. A stone turned over
revealed a crab, pincers raised in combat.

We were returning east to west,
a day of confrontations, your revealed
feelings unnerved me. Had you rehearsed them?

I wrestled the thought of change,
as weariness descended,
felt the damp chill of separation
as sun tarnished the sea.

This relationship between nature, place and internal thought processes is a continual aspect of these poems where human emotions become projected via an ever-changing landscape. In one sense they comprise a travelogue with an underlying narrative which is snippeted together with great skill while retaining an almost casual sense of distance. I get the feeling that Josephine Scott was and possibly remains someone who keeps a detailed diary. The mix of colour, shape, brief yet sharp description builds towards a whole which demands a re-reading. It would be easy to pass these poems by if you don’t give them a second shot and it’s well worth doing so as the work deepens on a second or even third reading. Dipping in and out is also an option but you may well feel compelled to read the whole collection at a sitting. These are poems which work best in their entirety I think.

The Last time I Saw You

You were sitting by your hospital bed,
lost speech, tubes, but still able
to communicate through mime.

At the door I turned to that little wave
you always gave, and the shoulder shrug,
familiar gestures.

But you were weary, I see that now,
your future uncertain, you decided to give in,
no fuss, no judgment.

Splintered by our loss, we close ones
skittered around like wasps in a jar
till exhaustion floored us.


Josephine Scott is another new name to me though she’s clearly been writing for some time. These are crisply executed poems which explore the familiar in a way which makes the experiences feel new and fresh.