Review - “Aerographs of the Visible World” by Simon Marsh 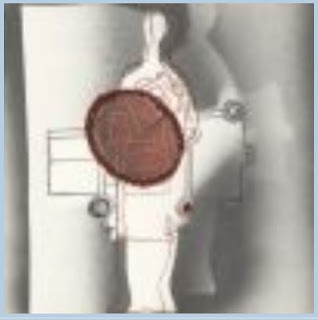 “Aerographs of the Visible World” by Simon Marsh, pub. Oystercatcher.

Here we have twenty five poems or ‘Pings’, each fourteen lines in length and each related to an artwork by Rebecca Forster. As is recorded in the brief introduction the cover illustration is Rebecca’s Ping no 2 which when related to the poem gives the reader some idea of the collaborative method and is a good starting point:

these hues you use

the rumpus in your heart

aren’t you flummoxed by

So the starting point for the poems is the relation between the visual and the written and there’s an interplay, suggested by the ‘quoted image’ which lets you know what kind of territory you’re exploring here. These poems are playful, retaining a lyric sense, filled with delightful phrases, references to composers and painters, and mixed imagery which fuses popular culture with sexual commentary. There’s plenty of ‘foodie stuff’ as well and also humour along the way, occasionally of the slapstick variety: ‘this must be the plaice said Chipset / the less we say about it the better.’ Try reading that without replacing the final word with ‘batter’ for example. This chapbook is filled with a sort of dreamy projection, an ongoing ‘narrative’ which is wonderfully entertaining as well as being exploratory and prone to sudden arresting phrases or riffs which pull you up short: ‘a spiked rotating sun & / satin suspender licked flames / that lashed her fires of enjoyable hell.’ (from ‘Ping10’). Wow!

Here are the opening lines to Ping19:

where goes the blue to leave

with one long laminal

‘launnedian’ passed me by but the alliteration and repetition allied to a mixed register which nevertheless reads as a continuous monologue is wonderful to behold and you can puzzle away at ‘the meaning’ while enjoying the flow and indeed the individual lines. In fact despite the conjunctions and suggestions of continuity these poems are very much ‘line by line’ and the tension between the enjambment and the line breaks is intriguing. I can’t help thinking again of Tom Raworth in this context. The lack of punctuation aids the ‘conflict’ between flow and stasis and these are poems which I found it best to gist through quickly at a second reading before dipping into  particular passages and simply enjoying the mix of vocabularies, sensuous lyrics and comedic interjections. I’m liable to start contradicting myself here in this multitudinous dance so here is Ping12 followed by a brief critical resume to conclude:

as turbines in Swansea bay

half trapped in amber

I was ghost mole spooked

until you spooned me

It’s well worth reading these pieces aloud to fully appreciate the mix of onrush and ‘resistance’ and to get a feel for the sounds. Go with the flow, try a tentative ‘interpretation’, always being aware that a celebration of the joys of language is a key motor in this instance. How, for example, is it possible to be – ‘..ghost mole spooked / by kitchen utensil drone sear scatterings’, if indeed the last line is continuous? A pointless question of course but I thoroughly enjoyed reading these poems and I hope you will too.