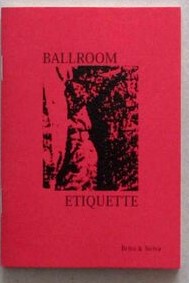 Bruno Neiva’s work, which I’ve enjoyed for a number of years, is always intriguing, refusing categorisation, forever disputing the frontier between art and writing.  Ballroom Etiquette, a new collaboration with Maria Brito, published by Team Trident Press, is firmly in these debatable lands, a text and image sequence of blurred boundaries and wonderful incongruity. Brito and Neiva plunder, mix, match, mash, splice and otherwise détourne two apparently incompatible sources: a Victorian etiquette guide (True Politeness: A Hand-book of Etiquette for Ladies) and a combat instruction manual for the military and police from the 1970s (Kill or get Killed). They describe the sequence as ‘both a parody of and a statement against violence and gender prejudice’ and it is indeed just that, but in a way that it is non-didactic and far from po-faced. It’s characterised by sly humour and a refusal to direct the reader towards a particular response though heavy-handed commentary or proscriptive framing. Instead, the juxtapositions, meeting seemingly by chance, like the Comte de Lautréamont’s umbrella and writing desk, do the work.

The images (from the combat manual) are degraded, distressed and isolated, floating in non-historical space. Stripped of their context, they become absurd, surreal: earnest men in suits and turtle necks, with crew cuts or slide rule side partings, grappling with one another at close quarters for no apparent reason. Then, the wry selections from the etiquette guide take the images to another place, of random pantomime or homo-erotic cabaret. One man places another in the beginnings of a choke hold from behind, accompanied by the advice that ‘when a gentleman who has been properly introduced requests the honour of dancing with you, you will not refuse unless you have a previous engagement.’ What appears to be a uniformed police officer holds a thick set, slicked-back assailant close, together with the admonishment ‘do not mistake affectation for refinement: it would be no less an error than confounding vice with virtue.’  A knee to the groin delivered by one figure whose head has been cropped to another, equally headless, is flanked by the warning that ‘the members of an invited family should not be conversing often together at a party’.

Ballroom Etiquette is the best sort of collaboration, one that goes beyond just two people working together and becomes something where it doesn’t really matter who is doing what - the collaboration is its own thing with its own thing going on. It draws a deft parallel between two different ways of asserting authority, through physical combat and through the more subtle, subliminal strictures that govern behaviour through mores, expectations and an enforcement of set roles that is, in its own way, as violent as a headlock or a punch to the windpipe.