REview - “This is a Picture of Wind” by J.R. Carpenter 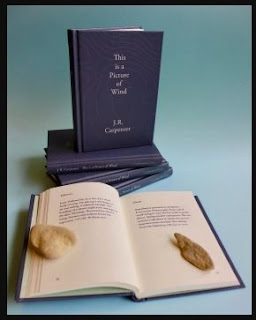 As Johanna Drucker says in the informative introduction to this new collection from J.R. Carpenter, ‘Weather is everywhere….  .’  Written initially as a response to the extreme winter storms of early 2014 these texts take on a wider meaning in terms of the long history of human writings in relation to our environment and, in particular, to the current experience of serious climate change.

Carpenter has a track record of working with a wide range of source material, utilising, appropriating and shifting existing writing to create both a documentary record and an imaginative response to our environment, one which is constantly changing and therefore tricky to negotiate. There is a recognition, then, of the almost-impossibility of a task which can nevertheless be undertaken by creating frameworks within which ‘the chaos’ can at least be partially contained. Perhaps this is the ultimate attempt to deal with the ‘form/content/’ dichotomy with a playful awareness that this is not something that can ever be ‘nailed down’, so to speak. This is a work made from the past and the present and which hopefully will speak to our future.

The sections in this beautifully produced pocket book are mainly organised through a calendar diary, usually comprising short prose poems and relating to several geographical locations. From ‘A Year at Sharpham’, for example, we have the following:

explosion. We slip in mid-stream. Ride the

Wind stiff on the way back. Oar-shaped

muscles sprout where wings should be. In

the morning, our arms are sore as if we had

been trying to fly.

So we have here a clipped writing style which combines a journalistic aspect with a poet’s response and these pieces – usually one per page – cumulate to great effect over the course of the book’s one hundred plus pages. The section titled ‘The Month Arrays’, which again embraces a calendar year, incorporates a strong visual aspect (another of Carpenter’s approaches to writing) by taking quoted snippets from ‘an array of sources’, presumably, which appear in alphabetical order. This minimal constraint highlights again the way a text can mix the random with the formal to create a sense of order in tension with the ever changing weather patterns which are impossibly to gauge accurately given the constant flow and shifting from moment to moment. I’m reminded here of Lisa Robertson’s Collection, The Weather, which Carpenter includes in her ‘Further Reading’ endnotes.

From ‘The Month Arrays’ we have the following, by way of example:

“snow in the night”,

“snow on the ground”,

I’m reminded here of a book by Alice Notley (I can’t recall its title offhand I’m afraid) ["The Descent of Alette", ed.] where the use of quotation marks throughout added a strong visual aspect to the entire project and the interplay between text and art, or text as art, if you wish, is strongly present in Carpenter’s work. I’m also reminded as I re-read this book of the storms themselves and the fact that my last published chapbook – Many Red Fish – was put together using montage techniques during this same period and included a number of weather-induced phrases relating to the severe conditions.

‘The Beaufort Poems’ which open this collection provide an arresting introduction by way of increasing text size which gives some indication of the sound aspect of the storm via a visual analogy, again suggesting that our forms of engagement are always provisional and uncertain: ’We never get the hang of it entirely’, an adaptation Of Louis MacNeice, which I seem to be fond of quoting, perhaps because of its appropriateness to a variety of situations. These poems also look good on the page as I hope this short extract will indicate:

I’d avoid reading the introduction and Further Reading section until you’ve read through the poems at least once. Plunge in and do the research later. I have a feeling you won’t be disappointed.