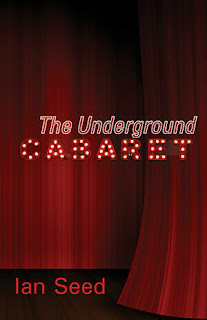 “The Underground Cabaret” by Ian Seed, pub. Shearsman Books. 105pp. £10.95
As it fast approaches one year since the sound of a key turning in the lock was heard up and down the country one cannot help but notice both silence and loss. Faced with isolation, often ironically emphasised by the technological skill of providing pictures of people on the walls and the screen in Zoom meetings, one might be tempted to return to the foundations of narrative and both read and tell stories. In his 1953 Life of Charles Dickens, His Tragedy and Triumph Edgar Johnson referred to the Victorian novelist’s lifelong preoccupation with prisons and traced this back to an early childhood acquaintance with the Marshalsea debtors’ prison in the Borough before highlighting the way in which the theme of confinement haunts the novels from the Fleet Prison of The Pickwick Papers to the Newgate of Barnaby Rudge, from the Marshalsea itself in Little Dorrit to the taint and stain left on the clothes and the mind of Pip as he concludes his visit to Newgate in Great Expectations. It is no great leap from looking at this preoccupation to reading Ian Seed’s latest collection of short prose pieces The Underground Cabaret about which Andrew McMillan writes that they are peopled with those ‘who suffer alienation and loneliness in eerie and surreal encounters which emerge out of the seemingly ordinary and mundane.’

This new collection of prose poems opens with ‘Story’:

It was bound to be a distortion of the truth, but I hoped to make it seem authentic, not only for the sake of my reputation, but also in order not to break the spell of the stories which my audience told themselves to make their own lives real.

Four years ago Seed published the first English translation of Pierre Reverdy’s Le Voleur de Talan (The Thief of Talant) and his fine understanding of the French original appeared a hundred years after the French text was completed as if reclaimed from the underworld. When I reviewed it at the time of publication I had been struck by Seed’s introductory comment concerning Reverdy’s ‘growing sense of dislocation and loss of self’, an Orphic world in which we discover as we often turn our heads that ‘behind us / something flees much / faster than us.’ It is the past that makes us who we are and the surreal glimpses we are offered from The Underground Cabaret are created by a writer whose eyes peer through what Charles Olson had referred to as ‘the nets of being’.

During these months of lock-down the  days seem to merge into each other and the white spaces on the calendar or in the diary can appear like tracts of snow-covered land. Trapped inside one might feel that one day is so like the next that, as with prisoners counting the days of their sentence, the disorienting isolation can be to some extent counteracted by the phantasmagoric shift of jail cell into home or nest. Ian Seed’s awareness of the way in which this passing of time can leave one disoriented is caught within the nightmare of ‘Missing’, a story where the loss of childhood’s world can leave one exposed to the fragility and danger of an isolated present moment. The opening paragraph is both bizarre and unnerving as the writer finds a creature which is ‘a kind of horse dressed like a doll with her ears sticking out of either side of a bonnet, wearing rimless spectacles like an old granny, and talking to herself like a small child’. We are immediately charmed by the narrator’s power and caught up in a world of Little Red Riding Hood in which the human and the bestial merge into a picture of childhood. As the tale moves towards conclusion the narrator sees the strange figure being taken away by a man ‘from the other side of the city’ who has come to claim her, as a future husband claims the hand of a daughter who has moved beyond the world of childhood and home into the happily accepted world of marriage and independence. The narrator is left isolated at the end as he gets off the tram which has conveyed the child/horse away to a new life:

The tram-stop was in the middle of a dual-carriageway and the traffic swarmed by on either side. I realised I didn’t have a clue where I was, and had no idea how to get back home.

The disturbingly surreal narrative threads in Ian Seed’s latest collection of prose poems offer an echo of the world Paul Auster made so distinctive in his 1987 novel In the Country of Last Things:

I don’t expect you to understand. You have seen none of this, and even if you tried, you could not imagine it. These are the last things. A house is there one day, and the next day it is gone. A street you walked down yesterday is no longer there today…When you live in the city, you learn to take nothing for granted. Close your eyes for a moment, turn around to look at something else, and the thing that was before you is suddenly gone. Nothing lasts, you see, not even the thoughts inside you. And you mustn’t waste your time looking for them. Once a thing is gone, that is the end of it.

Just as Dostoevsky’s ‘Underground Man’ tells us that ‘cities can be intentional or unintentional’ Ian Seed’s narrator concludes these compelling tales by telling the reader that after being interviewed by an Englishman who spoke in Italian ‘I realised I had no idea where I was or how to get to the cheap hotel where I was staying near the station’. His final words raise more questions than they can possibly answer as he wonders ‘What on earth had brought me back to this city after so many years.’ My reply would be that it was the compulsive need to tell stories which will be met by our own compulsive need to listen to them.
Copyright ©  Ian Brinton, 2021