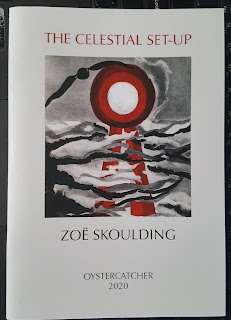 This short collection by Zoe Skoulding engages with existing artworks or artists/poets – the organic architecture of Gerard Grandval and the poetry of Apollinaire, for example – to produce new materials which mix genres and different kinds of language which have a surreal and undermining feel. There is comedy here as well as a political aspect and the reader is being constantly surprised by the unexpected juxtaposition and by powerful rushes of language which feel both condensed and yet expansive at the same time.

The opening poem ‘A Rose for Rosa’ is a kind of ‘road movie’ piece, written in a block with deals with the iconic afterlife of Rosa Luxemburg. I’m reminded of a similar poem by Damian Furniss where the subject is Che Guevara and where the poem’s tone is deliberately uncertain and puzzling though there is clearly admiration here and a sense of absence which ties in with a revolutionary status which has a mythic feel, with possible hints towards Christianity. There is no punctuation either and the piece is continuous (taking up a page) which gives an almost incantatory sense to the whole. Here are the opening lines:

In the title poem, ‘The Celestial Set-Up’ we have the following:

imagine staring up into an open umbrella

you’re holding as it pivots

after the defeat after the ruin

and the flawed reconstruction

what’s left but drawing the body into

its own circle spinning round an axis

As the poem progresses there’s a sense that the mixing of languages – that of a personal, human kind and of an impersonal, ‘celestial’ nature – provides the basis for a strangely internalised lyric which has an existential note. There is awe here but also a sense of distance from the recording self of the poem:

for now we wander slowly about the star sphere

in a discontinuity that exists as aperture

to defeat the sound of an ending not to

don’t look at the sun

Intriguing and estranging at the same time.

In ‘A Strait Story’, which appears to be based on a research trip of some kind on a ship (Prince Madog) we have the language of disorientation which refers both to the immediate situation (out of our element) and also possibly to our wider political, economic and ecological plights:

There’s no-one steering our country. Which country would / that be? For the fish, everything joins up. You’d think the sea was an /open space but here it’s tunnel vision. It took so few to sink us. The / raster chart maps the shifting line of a boat through rocks and wrecks, / where land is a broken shell around the sea.

‘Displacement Fixing By Steerage’, which also has an elemental location, uses research documents/books to do with navigation and marine terminology and appears to combine a playful sense of humour with something more disorienting and challenging. Take the following paragraph for example:

many with which experienced marine reconnaissance can assist. In a

setback as you travel southward, the constructive total loss appears to

drift northward over your heaviest hatch. If you have a vigilante, you

need not worry about marking the earlier quotas. All you have to do is

mark the shift in information.

It’s difficult without doing some serious research to know how much of this makes sense in terms of potential application but again the mixing of sentences creates what appears to be an absurd set of description/instructions which combine the vague with the nonsensical. You read each sentence intently, noting what seems plausible and what doesn’t, jib at the use of the words ‘hatch’ and ‘vigilante,’ perhaps, then hoot with laughter at the final sentence which in a changed context takes on a different role.

In ‘The Bed’, which is a ‘repetition poem’ where each line starts with the words ‘our bed’ we are back on firmer ground with a poem which has a strong sense of being generated either by automatic writing or an engagement with the classically surreal and which includes some wonderful lines. Here are a few which I found strangely alluring:

our bed was a slow process of disintegration

‘During the Works (After Apollinaire)’ appears to rework a sense of the surreal as applied to both a dying (?) culture of consumerism and its attendant glamour with the madness of war and current catastrophic issues: ‘Mannequins grimaced / vacant in spring neons / and it set my teeth on edge / this razzle of fashion eternally / consuming its own death’. The final stanza seems to bounce back with a jaunty if ironic tone:

There’s nothing so uplifting

as having loved the dead

you lose yourself in glassy

and you don’t need anyone

As I’ve said before Oystercatcher chapbooks have a strong record of cover design and this is no exception, an illustration by Steve Xerri which keeps the standard high.