Review - "The Journey and Other Poems" by Mahmud Kianush 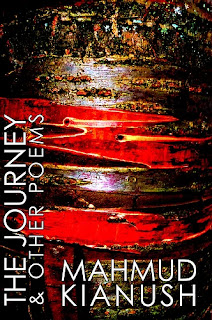 This is an intriguing collection from a writer whose work I’ve not come across before. Mahmud Kianush, was an Iranian writer who lived in London from 1976 until his recent death, aged 86. He was highly thought of as a writer of poetry for children as well as producing half a dozen collections for an adult audience. He utilised ‘free verse’ as well as working from classical Persian forms such as the ghazal and developed his own forms of metrical poetry in accordance with the music of the individual poems. He was also a translator of a wide range of writers, including Steinbeck; D.H. Lawrence; Eugene O’Neill; Samuel Beckett; Lorca and Cavafy among others. Although there are influences here in his own poetry his work feels refreshingly individual and perhaps the best way of writing about it is to do so by quotation, then commenting on individual passages. There are religious elements to his work as well as those of a political nature but if there’s a common theme it may be that of a questing, searching curiosity about the world and its people, where everything is open to question and where humour is juxtaposed with utmost seriousness, often in the same sentence or stanza. The secular and the spiritual are contrasted, considered and disputed and I’m reminded here of at least one of the writers he has translated – D.H. Lawrence – where you have the sense of a mind debating with itself and where thought and feeling are intermingled in a distinct and perhaps unique manner. There is at times also an element of didacticism but it’s a lecturing mode which is able to ‘undermine’ itself by combining an anarchic humour with an almost ‘wagging finger’. Here we have a section from a long poem entitled ‘No Pretensions:’

This is the bitter cry of despair,

and I have heard it from many mouths:

in his rose gardens

of skulls and bones;

and from Jean-Paul Sartre,

in his nauseous tales of angst

But all these messengers of doubts

in order to disturb the peace

to have a mind

Now that I am blissfully anguished

with purity of pain,

I scatter the red shouts of madness

on the wide roads of the wind.

There’s a sense of a public persona here, amid the taut lyricism and personal projections, an unusual combination which may well have its origin in Iranian literary tradition, something I confess to not having much knowledge of. The engagement with previous writers from different traditions and across time gives a gravity to the writing and there’s a wonderful sense of paradox in ‘blissfully anguished’ which suggests pleasure and pain (cerebral and physical?) which is then followed by the beautiful brevity of the last two lines.

In ‘Perhaps’ we have the opening stanza:

I have walked on Earth

for hundreds of thousands of years

as the sole observer of Things and Others

I have walked alone,

forced by an inner necessity

to create all and everything anew,

watching them in amazement,

in a state of near lostness,

but not with dread and despair.

The first two lines are full of portent, suggesting both the individual and the everyman, a complication of awe, grandeur and a discomforting isolation yet the inner dialogue of this ‘wandering dreamer’ suggests something more human and open to the here and now of it. I get the feeling, again and again, in this collection, of a ‘lyric sweetness’ being commented on by something much more unearthly and austere and it’s this dialectic between the human – the domestic, if you like – take on things and something much colder, a universal blankness, which makes this poetry so intriguing:

at the beginning of the Big Rest,

the Silence of the Universe

is merely the echo

The bleakness of this statement is tempered by the suggestion of humour, if of a dark (bitter) variety.

At the end of another long poem – ‘The Blossom of Astonishment’ – we have the following:

on the border of Yes and No,

in the dreamful awareness between

Between Reality and Illusion,

I live my thoughts,

I taste my thoughts,

I drink my thoughts,

I scatter my thoughts in the shape of words

across the Eternal Infinity of Space

I take my Thoughts out of

the winter greenhouse of Feelings

The mix of abstraction and lyricism, of modern and traditional, has a playful aspect which combines high-minded philosophical titles (Reality and Illusion/Being and Nothingness) with a more sensual language which is both down-to-earth and more immediate while also retaining a succinct sophistication. This is poetry which can be read aloud, declaimed in fact in a high rhetorical mode while embracing a sense of complexity within apparent simplicity. It’s beautiful stuff indeed.

The Journey & Other Poems is an astonishing book which combines different philosophical and literary traditions to create a celebration of the world and of our experience of it in a manner which feels both fresh and yet is based on accumulative materials. I could say a lot more about this but it’s the sort of collection which the reader should discover and ponder for his or her self. I hope this short review provides a useful way in and at least registers the existence of a body of work which I was totally unaware of.