Review - “Shadow of the Owl” by Matthew Sweeney 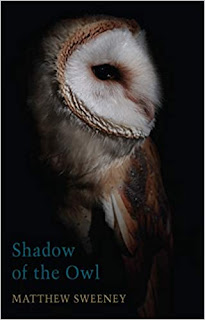 I’d not read a lot of Matthew Sweeney’s poetry prior to engaging with Shadow of the Owl, his final book, which deals with the last year of his life during which he was diagnosed with motor neurone disease. The image of the owl becomes a dark persona, an uninvited guest who appears and disappears, fuelling an inner dialogue where the poet reflects upon his worsening situation in a state of near paranoia which dominates the entire collection. There is plenty of energy in this writing though and I shall certainly be looking at Sweeney’s earlier work after having encountered this rather sad tome, which nevertheless is filled with an irrepressible resistance to the inevitable. If there is a prevailing influence it’s that of Kafka, a writer who Sweeney had much time for and whose presence here is undeniable.

Let’s take a poem from the opening sequence of twelve twenty liners entitled ‘The Owl’ by way of example:

I felt the presence of the owl last night –

He was in the room with me. Not literally,

he appeared in a dream, where a blue van

struggled up an icy road, before sliding back,

in a horrible, wriggling way, to what felt

like an end. I’m not sure how it seemed so.

And I can’t say where the owl was in this

little film, except he was definitely there.

This morning I came down the stairs,

a few brown feathers on a white plate

on a kitchen table. OK, then, he must be

a brown owl, but why donate some feathers,

and what did these denote? I made coffee,

then put on a CD of Anouar Brahem’s oud

that seemed to suit the moment. And I

decided it was the time to poach two eggs

to serve on top of two slices of rye bread

while I primed the espresso machine again

and asked myself what the owl was saying.

Dreams are a constant device in Sweeney’s poetry where a hazy, penumbral imagery fuels a questioning, anxious narrative which attempts to analyse and interpret imagined events in a manner which may delay or prevent an inevitable outcome. There’s a sense of improvisation, allied to a learning lightly worn which makes this poetry attractive to read even though its subject matter is inevitably dark and filled with foreboding. Then again, the ‘foodie’ element in his work is irrepressibly uplifting and features throughout the collection, including those poems which recall escapades in Central and Eastern Europe. Most of ‘the action’ in the present relates to a suburban environment in Cork which has a more domestic environment.

In ‘The Crucifixion’ from ‘The Sequence’ we get the following: “I was boiling a beetroot when the doorbell rang. / ‘Who the hell is this?’, I muttered, marching / to the door.” Again in nightmare mode we have a scenario where the poet has apparently ordered a cross for his own crucifixion, complete with the required paperwork. This mix of bureaucracy and absurd horror presented in the form of a surreal dream is par for the course in this imaginative projection and has an almost literal quality which fuses comedy with something much more sinister: “The first man grinned, shaking his bag of nails / and patting the hammer in his belt. ‘We’ve come / to carry out your crucifixion.” After the apparition has been repulsed and the poet safely indoors we have the final two lines which combine the domestic and flavoursome with a less wholesome note: “I went back to the kitchen to check my beetroot. / It had nearly boiled dry and the water was red.” The brief reference to a ‘giant clown’ adds to the spooky atmosphere.

There’s a relish for life here, via a celebration of music, art, food and travel which highlights the sense of loss given a diagnosis of a terminal illness but Sweeney’s range of subject matter and his relentless assault on ‘the owl and its ilk’ in a series of strange, dreamlike scenarios keeps the pages turning. I think on balance I found the opening sequence which focusses intensely on the disturbing image of the owl, and which becomes a sort of visceral hatred of the creature to be the most effective part of this collection, but it’s filled with a rich overflow of sensual imagery which pits robust health and pleasure against decline and decay. There’s a good humour throughout which is irrepressible and at times very moving.

The final poem in ‘Last Poems’ is worth quoting in full:

After they gave me morphine

following the incident when my heart

stopped for eight minutes and a bunch

of doctors in red suits attached

a loose curtain of coloured wires

to my body, I woke up in intensive care

to later try to sleep again, a very

dreams. In the first of these

I was eating a sandwich on a riverbank,

and when I was nearly finished I saw

it featured a hairy slice of mouse.

And yes, I gobbled this, and it was good.

The chef was senor Morphine.

I won’t tell you about the other dreams.

This has an almost Alice in Wonderland feel with its skewed logic and drug induced imagery but there’s also a sense of ‘everything will be alright’ about it which I found curiously sad and yet optimistic. This may be a strange choice of book to read at the present time but also perhaps relevant and I’m glad to have become acquainted with Sweeney’s work even if under such circumstances as those we’re living through.