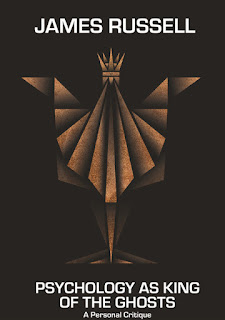 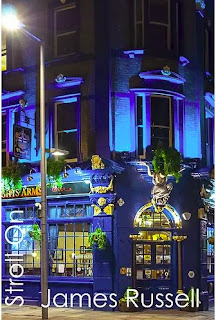 Anyone encountering these books for the first time will realise that they are quite dissimilar, while their linkages can be grasped with a little patience and effort. Ghosts is an idiosyncratic academic memoir which pays some attention to Russell’s other identity as budding creative writer;- the most explicit acknowledgement occurs on page 230 where among other things we learn that he had his first poem published in a magazine 1999, and first collection 2004; and he adds that the ‘chapbooks tend toward the satirical’. Stroll On is certainly that. I suggest that someone not clued in might not realise the two books were by the same author.

Of the two, Ghosts is the more substantive and ambitious, Stroll reads more as something of a caustically diverting entertainment, with some veiled strain of actual reality. Ghosts, one feels has the material and might have the makings of a campus novel, of the Bradbury or Lodge variety, and given that Russell can do prose narrative it is certainly a point of interest that he chose not to here.

If nothing else, Ghosts certainly conveys that Russell has a complex and unorthodox personality, and his rendering of the career path is remarkably insightful for candidate psychology or philosophy students. Russell certainly regards artistic pursuits as potentially helpful or healing; and Ghosts at times leans toward fictionalised elements. Russell has a good grounding in philosophy, but it is the psychology that has drawn his major commitment, from undergraduate to retiring Professor and more specifically developmental psychology, which is a major thread here.

Opting for the first person, and mostly, seemingly factual, although some names are changed, we get commentary that is not inconceivable either from a therapy session or a divulging ramble over at the pub. It makes certainly for quite fascinating autobiography, and comes with a serviceable index, and, equally, also retains that quality of wondering why Russell took certain career changing choices at different times. Some of it reads anecdotally, admittedly. And were this drama it is replete with much behind the scenes gossip and revelation.

Some of the insight on psychology is decidedly theoretical and befitting of the kind of difficulty and expertise required for it. So we get, for instance, criticism of modular and connectionist approaches to the brain. There is a good deal on standard curricula of the likes of a Piaget or Chomsky. At the same time there is plenty of staff office politicking going on. Russell strongly identifies himself as an experimental psychologist, and there is a good amount on how some projects were done and got funded.  And we get comments on hob-nobbing on the conference circuit. He is assuredly not from a privileged background, but managed to finish up his career teaching at Cambridge, a highly fortuitous outcome after previous spells at Glasgow, briefly and then Liverpool. A couple of academic books resulted including Agency (Erlbaum 1996).

There is a short thematic introduction; there is the main body of memoir, - ‘Let’s Make a Career of It’; and a Q&A session at the end, much of which is of the academic variety. This is a bit like having a preface and coda. Russell is consistently highly engaging; no aloofness, no ivory tower, no higher principle or cause to effect stylistically, so indeed this is very unlike Chomsky or Piaget; a bit more like Laing in some respects, although more informal than he. Laing’s autobiography tends to give little away. Russell has something of a relaxed, or at least giving nature about him, and tends to the open book or mind rather than the defensively closed. Some of this struck me as unexpected and unusual.

Russell opens the core of the memoir with a subheading ‘In the stage of concrete operations’, which, of course comes from Piaget and there is a good amount of discussion of experiments with Piaget’s conservation principle, which able children seem to acquire about the same age. That the second subheading to follow is called ‘Informal operations’, ie not formal, gets us much more into Russell’s preferred mode of delivery. Russell’s first sentence in the main section is quite revealing,-

‘Setting aside the possibility that I might have seen, on returning from Sunday School one day, Donald Broadbent on the Brains Trust, my first experience of or brush with psychology arose through my hatred of school.’ (p25)

As someone well aware of syntax through a Chomsky or Vygotsky, Russell must no doubt be very aware just how unconventional this is. A Cambridge Professor who hated school! Further along we have, ‘It was not so much schizophrenia in itself that did it for me as the combination of literature and a compelling psychological category.’ (p29) Russell expressed disappointment at his grades; but evidently was reading psychologists out of an independent and genuine interest which no doubt helped with the job applications when the time came. I could add that Russell later displayed not at all a hatred of academia, but a somewhat taxing engagement with its staff rules, mores and politics.

Given that this opening sentence gives a strong flavour of what is to come, though granted any ‘hatred’ thereafter is much toned down, Russell finishes up with some remarks about Jerome Bruner’s autobiography;-

‘Jerry Bruner called his autobiography In Search of Mind. He didn’t find it (it certainly did not exist in a law faculty). Well, I did not find it either; and I hope my failure is exemplary.’ (p256)

This is quite direct and indeed satiric; I can only suggest that Russell’s book holds up well when contrasted with Laing’s different methodology in Sanity, Madness and Folly. Laing chose to separate out from his professional psychology his more creative ventures like the sonnets and perhaps Knots or the creative pieces/addenda  ‘What Is’ and ‘The Bird of Paradise’. Russell manages a careful but generous intermingling of his personal and public lives. This is especially relevant to the developmental perspective.

Stroll On is so different it might be by another author; but then if one engages those cited prolix sentences that might give some clues. There’s a novelty to Russell’s approach; it is not quite like anybody else. Stroll, one might say, is a long narrative satiric poem about a couple, Belmont and Tuppence, where Belmont might be a not too carefully concealed rendering of certain of the qualities of Russell’s persona. It is almost theatrical. I am reminded a little of the likes of a Douglas Oliver or Barry MacSweeney without the scathing social criticism, a much more imbued sense of humour, and little estimation of the preciosity of poetry; indeed Russell’s targets loom closer than that. Russell had early on been to a reading by Lee Harwood, on which he commented that ‘Psychological realism would kill this kind of poetry stone dead’ (Ghosts p187).

Stroll On again has Russell’s prolix, encompassing sentences, although here serving the cause of prose poetry, or poem-prose as he suggests. There is a revealing stanza opening near the end in poem 28,-

‘Belmont told her he was re-working Tinniswood’s sitcom
I Didn’t Know You Cared about the Brandon family, but
With all the comedy drained and nastiness put in its place.
He was, you see, darkening it to symbolise the dark times
In which we live.’ (p83)

Our poem’s final words are ‘And their love affair began at last’ (p105), although there is a rather odd sense of haplessness about some of the characters, like Tuppence, who gets into theatrics and vanity publishing, and equally of a drifting into something of an off at a tangent netherworld, whereas earlier suggested, realism doesn’t seem quite to do, to explain it. Some of it naturally is about wayward expectations; given that to get through all this we must have and entertain expectations of some sort. On this score Russell is more expansive, less the stringent or convinced minimalist.

Russell, then, has a very distinctive voice given to longer more elaborate phrasings and sentences in a wider perspective that can encompass an impressively accommodating frame of reference; thinking, for instance of the long elaborative lines of DH Lawrence’s poetry. There is a strong sense of wryly drawn drama to his expansive prose poem and indeed also to the memoir, with a frequently playful connotation, though not without some darker overtones, for a more holistic purview. Russell is so dedicatedly vested in his characters that it is their unpredictable interplay that often carries things along, for an unexpected and quite original read.