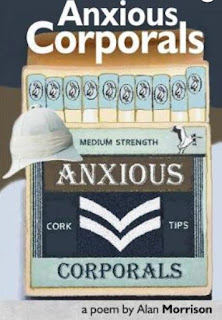 I don’t quite know what to say about this book. It’s astonishing. Described as a long poem, we have 150 pages of dense text, split into 25 chapters, with each line starting with a capital in time-honoured old-style poetry fashion. The title relates to Richard Hoggart via Arthur Koestler discussing the phrase which suggests the mixing of classes during WW2 and through National Service which

led to a rapprochement between working-class intellectuals/bookish men (it is mainly men we’re talking about here as feminism barely enters the discussion) and more privileged literary types. ‘The Anxious Corporal’ is effectively the working class ‘misfit’ who belongs nowhere due to a new kind of ‘social mobility’ or potential realisation of a different lifestyle. My dad would have fitted this ‘category’ like a glove if he’d been at all bookish but his skills were more practical (no less intelligent for that, the only one in our family to have any mathematical ability, for example) and though he felt himself to be inarticulate and not particularly literate he was neither of these things in fact. In some ways Morrison is a ‘throwback’ to an earlier time and I don’t mean this unkindly but his knowledge of history and cultural matters is vast and wide-ranging, even though this is focussed obsessively around the subject of class-consciousness and the pros and cons of social mobility. I get the feeling that he reads extensively and writes prodigiously, clearly so from his output.

Morrison’s tract – for it is such – is a mix of polemic, rant and quotation tied together in a sprawling mishmash of argument, information, and astonishingly suggestive social history which defies convention. The quotations, from, among others, Richard Hoggart, Arthur Koestler, Alduous Huxley, Ken Worpole (Dockers and Detectives, Verso, 1983), Robert McKenzie and David Lockwood, are a major part of the text and the way he interweaves these with ideas and thoughts of his own (and ours?) is quite exceptional I think. Class-consciousness and how this relates to the workplace in earlier times – we are talking about the earlier part of the twentieth century, hinting back to the nineteenth but mainly with the post-war consensus here – is a key part of the thrust and also the place of the working-class artist within this framework. It’s a book filled with contradiction and tension and an ever-anxious questioning, a homage to the place of Penguin and Pelican in our reading habits and a tangled history of radical politics and literary creation. It’s also a book of listing and I’ve never seen so many books mentioned in what is essentially a ‘creative’ piece of writing, a long and rambling poem in fact with very few full stops. This is a difficult book to quote from but I think I need to quote a substantial block to give the reader a ‘flavour,’ however insufficient this is. I suggest you get hold of a copy and form your own relationship with this singular tome:

…. So Pelican became an extinct sub-

Imprint but continued to circulate second-hand through

Charity bookshops, still cheaply priced but much prized and

Since their original production runs were so vast there was

Never a shortage of its thousands of titles, so ubiquitous those

Enterprises, a good few dozen made available for second and

Browsers, and nostalgic writers with a taste for dog-eared

Them back to gentler times of more questioning minds with

Nostalgia’s isinglass yet seemingly so ahead not only

Of their time, but even of future times in which they

Here we get the hint of a utopian aspiration and the reworking of the meaning of ‘nostalgia’ into its search for a home. I’m thinking of Walter Benjamin’s library here and also of an occasion a few years ago when Tim Allen and I spent an afternoon in an old three-story rambling second-hand bookshop in Southport, digging out the old Penguins and Pelicans and having a thoroughly good time.

Morrison’s story is of the failure of the post-war consensus which began during the Thatcher years and has led us up a garden path to the utter mess we’re in now. His vigorous, searching and at times searing investigations into the nature and purpose of real education in other parts of this tome remind me of the first stanza of one of my favourite poems by Barry MacSweeney, which goes like this:

Now that the vast furtherance of widespread publicity

for the degree course in how to be a complete nobody

it is altogether time to nip under the plover’s wing

and sleep. It is time to hug the lamb and mushroom.

It is time to pluck the rosemary, the rue, the swaying dill.

Anxious Corporals is a book filled with intriguing cultural reference, juxtaposed in ways which make you think again about what you thought you knew. It may be that it could do with a little editing though that might just spoil its effective overflow so perhaps it’s best left as it is. My favourite poetry collection by Alan Morrison remains Captive Dragons, a book which I still recommend you read but Anxious Corporals is singular, a one-off and I’m not sure where he’s going to go from here. I can only add that I’m glad to have encountered this book and that it’s high time I got hold of a copy of Ken Worpole’s Dockers and Detectives which I’ve been meaning to read for years so many thanks to Alan Morrison for the timely reminder.