Review - “Cobalt Blue” (writings from the papers of Sam Francis) 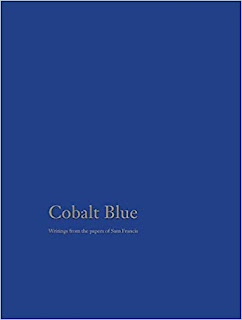 I was vaguely aware of Sam Francis’ painting and artworks in relation to the second generation of abstract impressionism but had little knowledge of his poetry and prose works prior to encountering this somewhat impressive tome. It’s a luxury item for sure, hardback and with beautifully reproduced images and texts on quality paper with well-designed layouts, the latter I think down to Jaime Robles, herself an accomplished poet as well as visual artist.

In a sense the clue is in the title, certainly as regards the artworks, where the vivid colours (plenty of blue but variants of reds, yellows, greens and black) vie with wonderful shapes and textures which have abstraction at their heart while clearly being influenced by the natural world. If there is contradiction or paradox in that statement I can only add that this is often endorsed by the writings which embrace both a materialist outlook while also having a sense of the numinous or spiritual. I’m a bit wary of combining these terms but Francis (who died in 1994) seemed comfortable about the tension and is confident in his designations. I can live with that.

The section titles include – Yellow dust clear water; Eros etched (Dreams and reveries) and Red groove (Essays and aphorisms). Some of the writing appears to be related to the actual artworks while some pieces are commentaries/homage to particular artists (Georgia O’Keefe, Jackson Pollock and Pierre Bonnard, for example) and others have no direct relationship to the paintings. There is certainly a concern with beauty here, with the aesthetic but also with the philosophical and in a sense the moral aspects of artistic endeavour. Process is as important to Francis as the end result and you could say he was something of a ‘Renaissance Man’ if that term isn’t entirely outdated. A lot of this writing has an aphoristic feel and from page 38 (these poems are untitled) we have the following: ‘Ideas hang around images like shadows.’ – a wonderfully suggestive encapsulation. On page 43 we have the following which seems to refer to William Blake, a poet whose work he clearly admired:

satisfaction and I hear that tender sound and turn and wipe

the blood from your wound my tongue feeds the worm with

There’s an incantatory feel to this piece (a prose poem I guess) which is as much a part of its meaning as the somewhat ambiguous and troubling ending which forces you to rewind and read the poem again.

I get the distinct feeling that some of these poems represent a way of working out problems which are related to his paintings/artworks as this extract from the poem on page 47 (which refers to Matisse) seems to imply:

that its parts are a whole thing included in itself

of a space of time

They could be called a space of time

movement is existence, isn’t it?

At the same time talking and listening

I go into a rose coloured room

I go into a brown golden room.

There’s an element of reverie here (dreams are an important aspect of Francis’ work) which can take you off into your own ponderings where philosophy meets meditation via creative practice and an urgent sense of questing. On page 51 we have another extract where the aphorism, once again, is pretty much a perfect encapsulation (of what, we may ask?) which will suggest all sorts of different associations to the reader and individual readers will, of course, have their own set of potential variations:

Though we look at the

colours of the waves are

Just think about all the possibilities those four lines ‘unblock’ whether through science, phenomenology, memory, a sense of transience or a combination of them all. Colour and light are at the centre of Francis’ vision, if I can give it that somewhat grandiose title and there is certainly a hinting towards ‘the numinous’ among the materialism of the phrasing. I never get the feeling of deliberate obfuscation here, but the serious attempts of an artist who is also something of an intellectual, to work out through his poetry and painting what it is he actually thinks about the world and his place in it. This may be a privileged space from which to start but that doesn’t in any way detract from the seriousness of the project even though there is (fortunately) a sense of joy in the undertaking.

On page 137, alongside an exquisite abstract which seems to hint at Jackson Pollock’s ‘Blue Poles’ we have this:

new moons climbing up into the sun. Where is Walt Whitman now

have seen them. Oh yes, we can bless the stars now and see all the earth

reflected in another mirror. Where are our lucky stars now, for we will

have star fields to run in.

There’s a lyric quality to much of this writing and a deep concern with dreams and the unconscious as a way of unblocking the ‘rational mind’ in response to the ills of the world (WW2, Vietnam). There also appears to be an element of the psychedelic in Francis’ work. In an extended interview at the end of the book he answers in response to the question – ‘What room is then left for the artist?’ – ‘Probably the only hope is some kind of muddling through, which means walking through the swamp without being drowned.’ Clearly he had a belief in the power of art as a positive force for change in the world and his prodigious output can be seen in this light which doesn’t in any way diminish its aesthetic substance. I love a lot of the artwork in this wonderfully designed book and am glad to have been introduced to Francis’ writings. I don’t always get where he was coming from in terms of the writing but there’s enough material here to stimulate and provoke and in the end that’s probably as good as it gets.