John Goodby - Poems from "Strolling Actresses Dressing in a Barn" 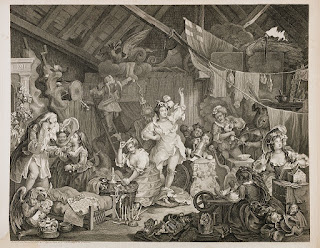 Strolling Actresses Dressing in a Barn (1738)
by William Hogarth

strolling players & this troupe now to stage it

in the sticks      wipe the bloom of the road-dust

from a swan-song The Devil to Pay in Heaven

Second state. Condition: Fair, some foxing. At the extreme right, Juno, gazing heavenwards, conning lines, expostulating. A monkey in a cloak squatting underneath her urinates into a Roman helmet. As the goddess extends her leg across a wheelbarrow, Night, wreathed in spangles, darns a hole in her stocking. Juno's book rests against a decorated salt box which contains a diminutive rolling pin (noise-maker) and six-tined brass thunderbolt, plus tinder-box next to the salt box on the dilapidated trunk. Excellent, with a few scattered unobtrusive marks in the margins and two stabilized short tears. Some bumping along bottom edge, well outside of image area. The state of the state.

A frowsty barn may stand in for the heavens

& stage for the immortals at The George

with the playbill but the star turn – if that

is her and not an unregistered Apollo - turns

her back to us Jupiter played by Mrs Bilvillage

Kid-demons slug it out to swig porter from the tankard

their shocked ma is she too taken up grappling a cat

while the leering Ghost bleeds its tail to intervene

& as Flora candles her dark hair to dust it with flour

at a broken mirror propped by a candle in this same

moment Cupid is leaning out from a ladder to reach

down a sock for Jove flare-headed pointing it out

giant-beaked tries to coax mush into a babe’s gob

Diana stands at the heart

of all plumb & plum-

would miserably have it

or the studied features

of a stony academy venus

to the uneven earth floor

on a classical altar with twist

of tobacco too & clay pipe

us & is the only soul to do

let us say with impunity

no hounds in view we are

stayed at the threshold

& assess that not dis-