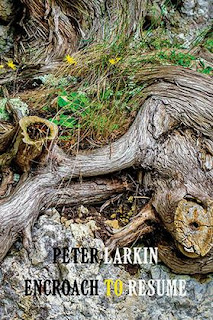 Caught on the Snag

Encroach to Resume is Peter Larkin’s recent collection of seven separate sequences of poetry and prose from Shearsman and one of the epigraphs to the first sequence in the collection is a quotation from Andrew Marvell’s ‘Upon Appleton House’ in which the poet’s eye focusses upon a green woodpecker walking the length of a felled tree:

The Hewel’s ‘still upright’ movement along the trunk of the felled tree brings to mind the precarious life stalked by human beings in Marvell’s earlier ‘A Dialogue between the Soul and Body’ where the Body’s complaint is that the distance between the head and the foot of man is fraught with danger:

O who shall me deliver whole,
From bonds of this Tyrannic Soul?
Which, strecht upright, impales me so,
That mine own Precipice I go

The soul of man compels a yearning movement towards the skies whilst the human body recognises the very danger of such aspirations. That Peter Larkin may have been contemplating this central human dilemma is further illustrated by the epigraph from Merleau-Ponty which stands at the opening of the last sequence, ‘Snag of a Tree’:

It is this whole field of the ‘vertical’ that has to be awakened…What is upright is the existence that is threatened by weight, that leaves the plane of objective being, but not without dragging with it all the adversity and favours it brought there.

The dangers and responsibilities contained in all movement were well-known to Samuel Beckett and the understanding that nothing is entirely self-contained, no beginning having full knowledge of its ending, is perhaps what is implied by the threat of ‘weight’.

As Larkin tells us a ‘snag’ is an upright dead tree left to withstand/decompose naturally in the midst of a forest:

A coming to be as stands to relations of its becoming, the difference of prayer within one of these further post-serial folds, the crackle of obsolete limb

The indurate vertical remains stand ‘Frozen into a hesitation post-ultimate friable with age’ and the morally stubborn hardening that age can bring is seen in a ‘weakness of life at its prominent verticals’. Some years ago I recall writing about Peter Larkin’s tone of apocalyptic warning and the manner in which it was tempered by hope. In 2010 he had opened his sequence ‘Brushwood by Inflection’ with a quotation from Theodor Adorno:

The less of life remains, the more seductive it is for consciousness to take the bare harsh remnants of the living for the appearance of the Absolute.

He then followed it with a quotation from The Gospel According to S. Luke in which the words of Christ being taken away to crucifixion offer a perplexing question:

For if they do this when the wood is green, what will happen when it is dry?

There’s the snag! And one might well turn to the other epigraph, quoted from Harriet Tarlo, which appears at the opening of ‘Snag of a Tree’:

never nothing quite
ending ever, after
every intervention
protection

The ‘snag’ stands ‘in full forest’ and its ‘Destitute boundary’ is ‘not fallen on itself’ but remains ‘broad branching as / death’s surrogate’. The ecclesiastical deputy offers a reply to Marvell’s precipice:

Those last two words might prompt one to look again at Hopkins’s advice to himself in a late sonnet in which he feels snagged by thirst’s failure to discover ‘Thirst’s all-in-all in all a world of wet’: