Review - “From A Council House In Connacht” by Ian Davidson 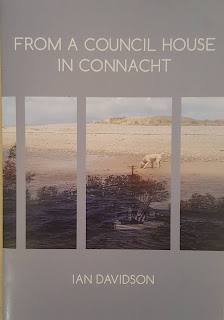 “From A Council House In Connacht” by Ian Davidson, pub. Oystercatcher, 22pp

I’ve not read much of Ian Davidson’s poetry prior to this collection and on the strength of it I’m sure I’ll be keeping in touch with his work. From A Council House in Connacht is a sequence which combines poetry with prose in seventeen individual pieces which mix social history with some wonderful descriptive writing. There’s a political aspect as ‘The Great Hunger’ (The Irish Potato Famine) is always hovering in the background of a work which is suggestive, over time, of changes in the landscape, in population and in in human settlement. The detail in the descriptive passages includes some superb writing, both in its unexpected analogies and an ever present awareness of living in an environment which has both a bleak beauty and a harsh aspect. Take this extract from ‘7:’

has a quality I’d never encountered. It is like blocks of

dense material being pushed at you off a particularly

manic elevator. You can hear the wind coming. You think

it’s a plane then realise that this is not a flight path. You

think it might be thunder but the conditions aren’t right.

You think it might be an army of orcs approaching, or

a tank squadron. But it’s the wind, building up across

the Atlantic. When you hear it coming you rush in

and shut the door because when it’s arrived you’ll

never get it closed. The wind from the West. When the

wind comes from the south up the valley it booms like

an aeroplane going through the sound barrier as it bursts

out of the valley. When it comes from the North and East it

hammers on the back door. The wind is not like an animal,

it is not a snarling beast, it has no focus but is an abstract

force and all encompassing. It becomes the world. If you

leave out your bin without tying it down then you might

kill a neighbour. A loose bucket will fly into the sky and

On the beach the terns

fly into the wind

as a gang and then just

We too lean into the wind,

our trousers and our legs.

The sheer physicality of this writing combines with a harsh lyricism to take you to a place which feels real in all senses of the word, where the descriptions are precise and powerfully evoked yet there is nothing here which is fanciful or in any way over the top. You have a sense of place which is both a specific location and at the same time almost timeless yet over the course of the sequence this relation between the narrator, the inhabitants (including the animals – Davidson is good on depicting the natural world in an unsentimental manner, much as John Berger did) and the historical record – often hard to trace – becomes the subject of the writing itself. From ‘15’ we have the following: And I look again at the shape of the landscape and human / tracks and traces, and what might have made it turn out / the way it has.’ So we have both an evocation and a probing which is as much to do with climate and ‘deep time’ as it is to do with history and politics. The intermingling of these facets within a human settlement and a human ‘take on things’ is intriguing and engaging.

At Christmas time all the houses light a candle in the

window. It is to guide in the weary traveller. People are

at the feed store.

No news I replied

and he shook his head

turning to the next customer.

to be divided up and distributed.

They buy me time.

Changing population statistics are used to suggest underlying political realities and the line – ‘They buy me time.’ – with its sly deviation from the more usual meanings attached to monetary exchange hint towards an alternative to economic determinism which is at odds with the situation described. Davidson’s insistence on relating the realities of human labour and endeavour to the underlying system which creates the conditions is at once polemical yet powerfully explicit, suggesting agency as well as an acknowledgment of defeat: ‘It is a history that lies buried, when the turf houses were collapsed on a / dead family, and the bodies were simply put in the / ground where they dropped, in individual or shared graves. So they lie there.’

The importance of land and how we make our livings from our environment, one way or another, is central to this poetry and the introduction of an historical context relating the here and now to past events reminds me of the writings of John Seed and also to those of Raymond Williams in The Country and the City where literature is celebrated but also seen as part of an ongoing argument in what you might still call a romantic socialist tradition:

no free state for the

as payers of rent

went to those who

worked it, in the

and the English press

Davidson’s poetry is unusual these days in the way he deals with experience and I suspect that his work isn’t well known. This is a shame as there is a need for this kind of writing which explores the past in a committed yet exploratory manner and relates it very much to the here and now. I’ve only touched the surface of this short volume in a brief review but his work is well worth engaging with.

There is also classic cover artwork from the impressive Steve Xerri, himself an interesting and provocative poet.