Review - "my my my life" by Alasdair Paterson 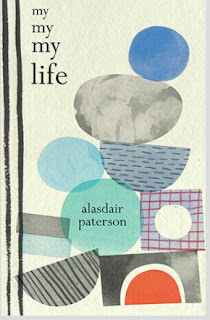 Alasdair Paterson’s current collection is made up of a series of sequences which all begin with the designation ‘My Life.’ So we have, for example ‘My Life as a Mad King’ in three sections, each made up of a number of villanelles. We also have pirates, picts, wordsmiths, bridegrooms, icebergs and possible evaders from justice (‘My life on the run’) among others. There are repeated motifs and themes – piracy appears to recur, for example, as does Icarus via Breughel and Auden and the notion of a prodigal son is touched upon more than once. Paterson’s work is allusive, puzzling, playful, awash with wordplay but rarely excessively so, and thoroughly engaging.

In ‘My life with the pirates’ we have brevity and wit each prefaced by a brief sub-heading, as in Parrot, for example: ‘Pirate. Parrot. Most letters in common. Some genes in common. Life expectancy: put your money on the parrot. Souls: keep your doubloons in your pocket.’ Under Dice we have ‘A throw of loaded dice will abolish chance. But don’t push your luck.’ The themes or ‘direction of travel’ are intriguingly pre-empted by the sub-headings and the ludic engagement with the mythic vocabulary of piracy is productive. I can recall John Hartley Williams having a piratical sequence in his early collection The Ship, a much darker beast but there are similarities and both poets have a playful approach to language and to themes.

From ‘My lives in the gloaming’ we get the following:

15. Crepuscular, too, in the labyrinth. A man, a hero even, could

lose faith in the possibility of the right  turning. And if it’s there

unthinkable, so you sit, back to the wall. Just you: true labyrinth,

If this sequence has a more melancholy feel – a tone which reprieves throughout the collection I can’t help thinking – then this is generated by the title which plays on the music hall song (Lauder’s Roaming in the gloaming) while also mixing a conventional written English with something more fruity and colloquial: ‘Ah widnae dae that if ah wis you, son.’  I can remember watching a tv discussion some years ago where Muriel Grey (I think it was she) was arguing with Melvyn Bragg about authentic and not-so-authentic Scots writing. Grey was ‘for Kelman and against’ McIllvanney’ while Bragg was more the reverse though suggesting ‘why not both?’ Which is what I think too and I imagine that Alasdair Paterson would concur.

In ‘My life as a mad king’ we have the following:

A banquet greased by beggars

a glass with added glass

a saucerful of secrets

A farthingale crammed with frankincense

a codpiece rammed with cod

a banquet grazed by bankers

A locket drenched in lachrimae

a joint spiced with jacquerie

a honeycomb aglow with hives

a trencher agroan with trauma

a banquet garnished with butchers

a mouth clenched on misereres

a doubler sewn with deathmasks

a saucerful of serpents

A pie stuffed with pincushions

a rack primed with ribs

a banquet greased by beggars

a saucerful of secrets

I love these ‘listing poems’ where the tangents are often generated by what’s gone before (how could it be otherwise, in fact?) and where the readers can imagine or add to their own lists. ‘a trencher agroan with trauma’ is simply wonderful and wonderfully dark in its playfulness. There are some beautiful sounds in the above as well as the imaginative and skewed images. Occasionally I wish that Alasdair would ‘really let go’ and overdo the mad associations but his mix of control and freedom is effective, entertaining and filled with literary allusion and suggestive phrases. I’m wondering at this point what Alasdair thinks of Drew Milne’s poetry but that’s probably a question for another time and place.

Although they might not admit to it many poets will have written or have toyed with writing the ‘rejection letter’ poem and Alasdair Paterson has gone a step further in his last short sequence here – ‘My life with the critics’ – where we get the following ‘observations’ – ‘Is it poetry? Is it prose? We asked around. Nobody knows!’ (Borders Balladeer); ‘Great stuff. Try to fit in a few pages in bed to increase your / chances of a quiet night. Indeed, you may feel that the author / has already done your sleep-walking for you.’ (Kyles of Bute Somnanbulist); ‘Beware Mr Paterson! The Stornoway Puffin has its eye on you!’ (Stornoway Puffin).

Alasdair Paterson has always walked a playful line between experiment and tradition, keeping an eye open for narrative effect and rarely heading for outright obscurity. His work combines the serious with the downright entertaining (sometimes simultaneously) and he’s always a pleasure to read even on those occasions when, blissfully, you don’t ‘entirely get it.’ The cover art, by his daughter Alys, combines shape, colour and texture in an enticing manner which will be familiar to readers of his previous Shearsman books.