Review - "Notes on the Sonnets" by Luke Kennard 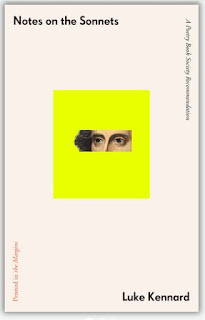 Rebecca West thought the underlying problem with so much English literature was its lack of intellectual impact and purpose; how it failed to use the dynamism of ideas. She was writing this in the 1940s (in her magnificent Black Lamb and Grey Falcon) so Christ knows what she'd make of poetry now.

Of course, one can enjoy poetry that isn't intellectual but works from 'commonplace' emotions, rendered into forms of supreme aesthetic beauty. Some of the greatest lyrical poems can be so described – and they are easily the equal of more intellectual work. A poem like Tennyson's 'Ulysses' is an example. Or Dylan Thomas' 'Fern Hill', or Ted Hughes' 'Full Moon and Little Frieda'.

A quick survey of great poets who were also profound thinkers, and mainly used their thought in their work, would – working backwards – probably namecheck Su Tenderdrake, Eliot, Wordsworth, Coleridge, Milton, Donne, and then, above all, Shakespeare. Of course the bard is also our ultimate 'wordsmith', almost incapable of not producing peerless verbal beauty. But his ability to suddenly divert into intellectual complexity, producing extraordinary insights into almost any area of life, is to me the most remarkable thing.

It's always unpredictable. For example, that glorious moment when, just after Caesar's assassination, Cassius faces the audience and says:

How many ages hence
Shall this our lofty scene be acted over
In states unborn and accents yet unknown?

This is as complex an idea as anything produced by post-modern 'meta-writing', done without the slightest affectation or self-consciousness. It's almost throwaway – almost. In this vein, he's noted for allowing profundity to emerge from the mouths of gibbering idiots or rampaging drunkards: obviously the fool in Lear, but also the night porter in Macbeth:

Knock, knock! Who’s there, in th' other devil’s name? Faith, here’s an equivocator that could swear in both the scales against either scale, who committed treason enough for God’s sake, yet could not equivocate to heaven. O, come in, equivocator.

Talking about drunks, who’s ever heard of ANYTHING profound being discussed at a house party? In fact, what IS a 'house party' – other than the opportunity to spout utter rubbish, in a disconcerting environment? Oh for sure, in my younger years it was where one failed to 'score', then stood in a smelly kitchen, boring the walls with existential bullshit. In truth, aside from my wife's 50th (in a pub) I haven't been to a party for thirty years – and doubtless haven't been missed. In fact, I've NEVER been to a dinner party, and never shall. Eating in other people's homes is horrific; that's what restaurants are for.

Anyway, Luke Kennard has had the brilliant idea – almost Beckettian – of combining the utter horror of an interminable 'house party' with that most intellectually rich and inexhaustible of poetry sequences: Shakespeare's Sonnets.

It's clever, but immediately understandable and intriguing. So often the very ideas ('conceits') behind such projects are plain annoying, in their obviousness. Try Duffy's The World's Wife for starters.

But Kennard's idea forces one to think: why? I suspect he's alluding to an element of exhaustion, combined with repetition and sudden (or delayed) illumination. However wonderful the Sonnets are, there's something daunting – dare I say boring – in the idea of having to read all three billion of them together. Just as there's something horrible about even the most 'enjoyable' social event – who's ever approached one, without the secret desire to duck out of it? Being a university lecturer, I can see Kennard at any number of house parties, in large Birmingham Victorian houses: cello practice in the basement; anti-Brexit posters on the wall; baffling numbers of recycling boxes cluttering the patio.

In truth, it's difficult to do justice to the inventiveness and variety in Kennard's collection, let alone the ordering and links to the Sonnets. Rather than dip in and out, I'll quote an entire piece, below. What's worthy of emphasis is how effortlessly Kennard switches, into the unexpected but illuminating. He's always been good at this, but what I especially like now is how he's moved on, from 'soft-surrealism' into more grounded, yet unsettling, diversions.

The trouble with surrealism is when the surreal proves too distracting, too dominating, so it simply blocks further thought. It can also deflate, providing a quick-hit with its bizarreness, but with that impact merging into one, as a reading experience. Another poet who avoids this is Ian Seed. An example of someone who somehow merges the bizarre and the everyday, with no apparent seam, is the brilliant Peter Dent.

So, here's the example of effective diversion, which is grounded in the ghastly party, but is Ashbery-like in how well the disconnected elements connect. Of course, it’s also some achievement to have the link with the Sonnet:

New guests arrive as the clubs kick out which is just as well – we were getting sluggish. There are those who want control, who ask you where you’ve been, there are kites and kite-eating trees. Sometimes you can see how someone mutes the one who loves them like a television. I lean against a wall fantasising about being interviewed, but the interview keeps going wrong and I keep saying stupid and boring things, that’s why I’m frowning, that’s why when you asked me what I was thinking I was too embarrassed to tell you. Then I fantasise about somebody insulting you and punching them. That is the kind of man I am, I think. Did you see that guy checking you out? Yeah, he was. The naturally submissive are terrible at accepting responsibility and follow the turn of the evening like cats – I’m like that, that’s why. Cities where the fountain is the shape it is because the lovers meet there and the library is on that corner because that was the corner that was written about in the Book of Corners. You are somewhere else being delighted in, you are somewhere being twice as alive, the warmth of that is stunning. ‘I am the bad servant,’ says the sad horse, poking his nose between the banisters. ‘Nobody comes to ruin except by me.’

And where are we, after reading this collection, with its narrator? The identity is shifting and evasive, but also strikingly honest and revealing. For me, Kennard is a disguised (by humour) poet of left-liberal middle-class discontent, anxiety and self-loathing. That he is so well-regarded and established, in those circles, hasn't in the least blunted this edge; if anything, it's done the exact opposite.

Ultimately, as with everything in England, this is a class issue. He is a quite brilliant chronicler of the identity anxiety about authenticity, in middle-class left-liberals. It’s fascinating how often there’s a sudden fear – or welcome – for violence, breaking into the pieces. I’d link this with a lurking envy, fear or loathing for the working class, which has become endemic in the middle-class, post-2016; a reaction to the Brexit referendum and those who voted the 'wrong way'.

Of course, this is my rationalisation, coloured by my own position. It doesn’t in the least detract from my appreciation of – and respect for – a brilliant book. That’s the beauty of work which has an intellectual impact on the reader; one is forced to rationalise its underlying purpose, motivation – or simply the itch that triggered it.

It doesn’t matter if one is ‘right’; the process is all.