Review - "Other Life" by Ed Luker 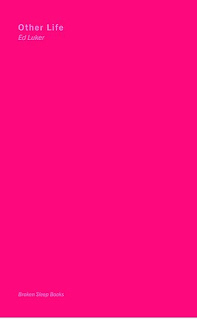 The opening poem to this impressive volume sets a scene:

some sick in the cereal

puffy in the cot

fat in the artery

our own extraction pads

strewn in the corridor

for less all the time.

So we have via Raworth a suggestion of an ‘avant-garde,’ a hinting towards and undermining of a literary tradition and a celebration of the phrase ‘densely unequivocal’ with its nodding towards both the infant state and old age and the messiness of both. Luker is a new name to me and throughout this book he manages to combine anger with humour with exploratory language which is both ‘of the street’ and clearly sophisticated and educated. He does this without seeming at all pretentious or condescending and his own ‘position,’ if I can dare evoke such a thing in a writer clearly influenced by Raworth’s ‘emptying out’ is ambivalent to the degree that the prime subjects are both class and capitalism. Luker has surely been a student and may well have been/is a lecturer (I’m guessing here) as his arguing with academia seems to have a foot in both camps and is an attempt to find a common ground between disparate interests in the hope of creating a stronger resistance to ‘the prevailing order.’ If this all sounds a bit prescribed then let me tell you that Luker’s mix of emotional onslaught, apparent despair (at times) and analytical thought processes are very real and convincing. He reminds me, to quite an extent, of Sean Bonney, another poet referenced here (‘Boris Johnson is a cunt and Sean Bonney is dead;’) where a visceral hatred erupts amid dark humour and emotional directness. Like Bonney Luker is unusual in being able to combine the position of street ranter with a more complex and interrogative form of approach which, to some, might be appear to be part of the problem.

In ‘Song for No One in Particular’ we have the following:

I am starting from the question,

are the intellectuals the enemy, of

some possibility of commonness, against

how do you get them to throw down

pulled away from the pit of thought’s

production, into the dance

both abraded by the stolen life

wishing to sequester yourself behind all those books

we wrack our knuckles on the door and ask you to

The tone of this is that of an eloquent rant, a reasoned argument which suggests that ‘living life in the moment’ and extracting pleasure from the immediate situation is a valid form of resistance and one that is an important response to a form of withdrawal and ‘miserablism,’ an anarchistic response to the situation. The fact that Luker clearly enjoys the process of engaging with this dialectic proves the point and his writing here also reminds me of that of John James. I’m not sure whether Luker is aware of James’ work or not but I’d like to think that his influence is still being registered in the work of younger poets as I feel it’s a worthwhile seam of exploration.

There’s a sense throughout this volume of a protagonist arguing with himself, of an engagement with language and ideas, where the ‘aboutness’ is as much to do with the mode of writing as with what’s being said. In ‘Poetry’s Non-sense,’ for example, we have what amounts to a manifesto which attempts to combine a social or political thread with something more akin to music and to meld these aspects into a realisable whole, despite the tensions:

how to break poetry

its indifference to players

such that all sense is social

because the sight is in kind

and not some crosshair of new

markets, or some locket of

the poet’s hair pressed in

the hand of those who do

on to some particular

who is possibly only

looking to evade this

This mixing of ‘the aesthetic’ with ‘the political’ is an attempt I think to avoid the potential for ‘the heritage industry’ in the former with the likelihood of a ‘crude misunderstanding’ in the latter. This is quite complex poetry which often follows a line which you could argue as being didactic but it’s an argument that’s always being broken into with an emotional intensity and the flow of the writing, a mix of control and letting go, is always productive and pleasurable to read.

‘For Dich’ (For you) has the feel of a nightmare monologue – ‘To you, my ghost, whose movement a breath that animates / the air. That’s another side of hell. The only clanking chains / the ones overburdened by association. The tongue furs its / own dust, adequating particulars to the unparticular. Exeunt.’

The mix of register – from ‘Shepherds seeking angels…’ to ‘Oil baron owns yacht to staunch the hole in his leaky heart all tied up with love’ – creates an opposition between ways of viewing the world which mesh together in an ongoing critique which is filled with rich yet often incongruous imagery. There is pleasure in enacting such excess and also in experiencing it as a reader.

In ‘Palace Secure’ the tone is more jaunty yet the contrasts are highlighted and the mix of ‘poetry and politics’ remains central as exemplified in the last three stanzas:

If there’s an overall feeling I take from this collection it’s that of an individual floundering in an increasingly harsh environment, attempting to deal rationally with complexity and a dystopian outlook which looks more and more like reality.